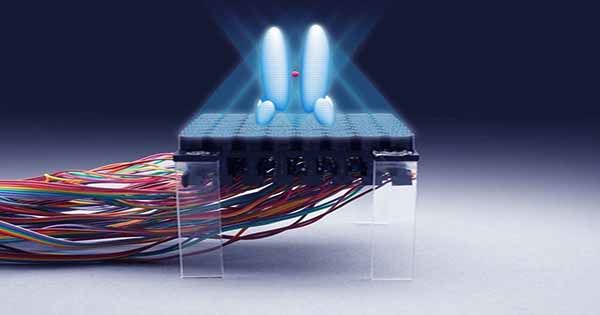 A Swiss researcher is developing a “no-touch” robotic gripper that uses sound traps for “trapping” objects, causing them to bleed. ETH Zurich pioneer Fellow Marcel Schuck has unveiled his prototype robot arm, which can lift and handle small objects without the need for human touch.

This technology will prove particularly effective in the watchmaking, micromechanics, and semiconductor industries, where small, fragile parts need to be handled. At the center of the design is the phenomenon known as acoustic levitation. The two 3D-printed semicircles are fitted with lots of small loudspeakers that emit ultrasonic waves. These hearing waves have a frequency greater than 20kHz beyond the human hearing range.

As these acoustic waves cross paths in the semi-sphere they interfere with each other and produce permanent waves if the conditions are right. There are high pressure and low-pressure points along with the standing wave so that an object can get stuck in it. The properties of the wave of duty such as its frequency and the force of the field of pressure are generated by its size and mass. Although this effect has been understood and used for more than 80 years, the use of the Shock project, No-Touch Robotics, is more expected.

In addition to physical equipment, Schuck and his team are developing some software that allows the user to manage the position of pressure points between speakers. Their hope is that the suspended object will then be able to be restored without falling to the ground. This is in addition to the techniques that robotic arm can perform.

This technology can also provide economic benefits for specific areas. Conventional robots are vulnerable to harmful objects, which are prevented by attaching rubber-like grippers. However, this does not only lead to contamination, requiring a separate gripper for almost every size, which is expensive to maintain. Using shock equipment and related software can eliminate these problems.

Schuck said in a news release, “The primary goal is to explore potential areas of application and open the door to the industry.” He is currently keeping a “development kit” for potential clients, which includes a robot gripper, control software, and instructions, and if everything goes well, the technology could be used outside the lab by 2021.