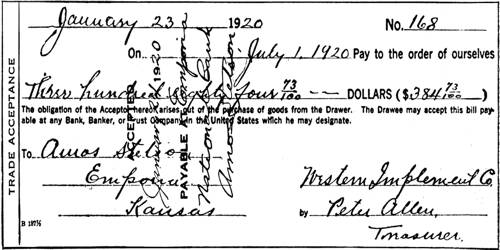 Trade Acceptance is a contractual agreement on a time draft or sight draft to pay the amount due at a particular date. The amounts to a promissory note that the seller can hold for future payment or use as collateral for a loan. In such situation, the bank has served as an intermediary; making sure that the buyer does not receive title to the goods until the note (or draft) has been executed for the benefit of the seller. It is a bill of exchange drawn straight upon and received by an importer or purchaser, rather than a bank, and due at a specific future time. Generally speaking, they are made when a company agrees to pay another company at some later date for an exchange of goods.

Trade Acceptance is a bill of exchange drawn by the exporter/seller on the importer/buyer of goods sold and accepted by such purchaser. So, it is a time draft or bill of exchange for the amount of a precise purchase drawn by the seller on the buyer, bearing the buyer’s acceptance, and often noting the place of payment. Trade acceptances are distinguished from other types of negotiable instruments, such as promissory notes.

Why bond is called a “Fixed Income Securities”?