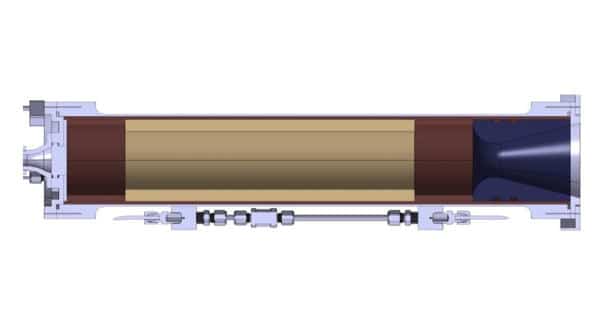 The development of hybrid rockets offers excellent opportunities for the practical education of students at universities due to the high safety and relatively low complexity of the rocket propulsion system. In a year defined by obstacles, a University of Illinois at Urbana-Champaign student rocket team persevered. Working together across five time zones, they successfully designed a hybrid rocket engine that uses paraffin and a novel nitrous oxide-oxygen mixture called Nytrox. The team has its sights set on launching a rocket with the new engine at the 2021 Intercollegiate Rocketry and Engineering Competition.

“Hybrid propulsion powers Virgin Galactic’s suborbital tourist spacecraft and the development of that engine has been challenging. Our students are now experiencing those challenges first hand and learning how to overcome them,” said faculty adviser to the team Michael Lembeck.

Hybrid rocket propulsion systems offer several advantages compared to solid or liquid propulsion, such as operational safety, thrust throttling ability, and lower cost due to simple system design, as stated in. Last year the team witnessed a number of catastrophic failures with hybrid engines utilizing nitrous oxide. The propellant frequently overheated in the New Mexico desert, where the IREC competition is held. Lembeck said this motivated the team to find an alternative fuel that could remain stable at temperature. Nytrox surfaced as the solution to the problem.

As the team began working on the engine this past spring semester, excitement to conduct hydrostatic testing of the ground oxidizer tank vessel quickly turned to frustration as the team lacked a safe test location.

Team leader Vignesh Sella said, “We planned to conduct the test at the U of I’s Willard airport retired jet engine testing facility. But the Department of Aerospace Engineering halted all testing until safety requirements could be met.”

Sella said they were disheartened at first, but rallied by creating a safety review meeting along with another student rocket group to examine their options.

“As a result of that meeting, we came up with a plan to move the project forward. The hybrid team rigorously evaluated our safety procedures and had our work reviewed by Dr. Dassou Nagassou, the Aerodynamics Research Lab manager. He became a great resource for us and a very helpful mentor.”

Sella and Andrew Larkey also approached Purdue University to draw from their extensive experience in the realm of rocket propulsion. They connected with Chris Nielson who is a graduate student and lab manager at Purdue. They did preliminary over-the-phone design reviews and were eventually invited to conduct their hydrostatic and cold-flow testing at Purdue’s Zucrow Laboratories, a facility dedicated to testing rocket propulsion with several experts in the field on-site.

The extended abstract, which the team had submitted much earlier to the AIAA Propulsion and Energy Conference, assumed the engine would have been assembled and tested before the documentation process began. Team leader Vignesh Sella said they wanted to document hard test data but had to switch tactics in March. The campus move to online-only classes also curtailed all in-person activities, including those of registered student organizations like ISS.

“As the disruptions caused by COVID-19 required us to work remotely, we pivoted the paper by focusing on documenting the design processes and decisions we made for the engine. This allowed us to work remotely and complete a paper that wasn’t too far from the original abstract. Our members, some of whom are international, met on Zoom and Discord to work on the paper together virtually, over five time zones,” Sella said.

The Illinois Space Society is a technical, professional, and educational outreach student organization at the U of I in the Department of Aerospace Engineering. The society consists of 150 active members. The hybrid rocket engine team consisted of 20 members and is one of the five technical projects within ISS. The project began in 2013 with the goal of constructing a subscale hybrid rocket engine before transitioning to a full-scale engine. The subscale hybrid rocket engine was successfully constructed and hot fired in the summer of 2018, yielding the positive test results necessary to move onto designing and manufacturing a full-scale engine.

In June 2021, the rocket will be transported to Spaceport America in Truth or Consequences for its first launch.

Lawmakers want to empower publishers to collectively negotiate with Facebook