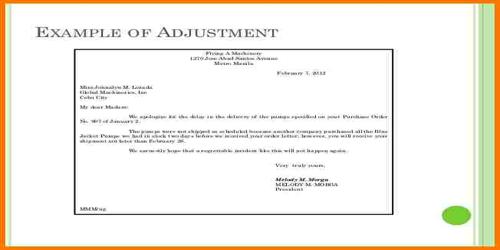 Adjustment Letter is a reply letter to consumer objection or claim. This letter can take on many different forms. The actual form of adjustment letter is governed by many factors like adjustment policy of the company, responsibility of fault, relationship with the customers, etc. It is official in character and explains the relevancy of the objection or claim and how it can be determined. However, the following are the general forms of adjustment letter:

When the seller grants full adjustment to the claim assuming he is at fault, then it is called adjustment granting letter. Reply letter should regret the mistakes and problems of the seller honestly. In this letter, the seller frankly admits his fault and assures the buyer that such a problem will not arise in the future. If the seller is definitely at fault, he can apologize by saying,” I am sorry”, “We apologize” etc. Nevertheless, sellers will occasionally grant a buyer’s claim even though the buyer or a third party is at fault.

In some cases, the final adjustment decision cannot be made until the seller determines who is responsible for the mistake. In this case, an interim reply is sent to the customer informing that his claim is under investigation. After receiving a complaint from the buyer, the seller should give its reply instantly. Delay in reply might build more arrogance. Through this letter, the seller neither grants nor refuses the claim.

When a claim is refused assuming the buyer is at fault, it is called adjustment refusing letter. In order to uphold the goodwill of the company and maintain a connection with consumers, the seller should offer further assistance and promise of satisfaction.

Through this letter, a compromise is offered in order to maintain good relations, or avoid litigation. If the customer demands something detailed like reimbursement or alternate, the seller should grant the assure right away. This letter is written when there exists some differences of opinion about the standard of service or quality of goods or when some fault was outside the control of either party.

This letter is written by expressing regret for the customers’ inconvenience and thanking him for pointing out the error. The language of adjustment letters must be polite and welcoming. Such language will cool down the anger of the buyer.

After getting the claim from the consumers, precautionary measures taken by the seller should be indicated. The seller must also promise the consumer that he will not face any such inconvenience in the future.

If the claim of the customer is unreasonable, awkward and unfair, the seller should not respond aggressively. Rather, he should persuade the buyer to judge the matter from the seller’s angle.

Use of Circular Letter for announcing Change of Business Address