Home Business What are the certain rules of determining the Proximate Cause? 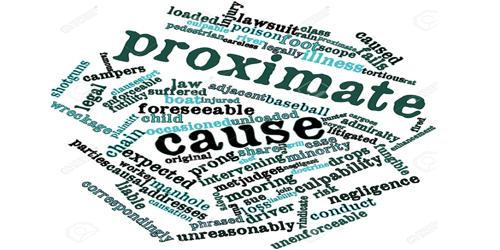 In the law, a proximate cause is an event sufficiently related to a legally recognizable injury to be held to be the cause of that injury. There are mid-types of causation in the law: cause-in-fact, and proximate (or legal) cause. It is important that courts establish proximate cause in personal injury cases because neither everyone nor everything that causes an injury can be held legally liable. Cause-in-fact is determined by the “but for” test: But for the action, the result would not have happened. For example, but for running the red light, the collision would not have occurred. For an act to cause harm both tests must be met; proximate cause is a legal limitation on cause-in-fact.

A few circumstances exist where the “but for” test is complicated, or the test is ineffective. The primary examples are:

Where two separate acts of negligence combine to cause an injury to a third party, each actor is liable. For example, a construction worker negligently leaves the cover of a manhole, and a careless driver negligently clips a pedestrian, forcing the pedestrian to fall into the open manhole. Both the construction worker and the careless driver are equally liable for the injury to the pedestrian. This example obeys the but for test. The injury could have been avoided by the elimination of either act of negligence, thus each is abut for a cause of the injury.

Where an injury results from two separate acts of negligence, either of which would have been sufficient to cause the injury, both’ actors are liable. For example, two campers in different parts of the woods negligently leave their campfires unattended. A forest fire results, but the same amount of property damage would have resulted from either fire. Both campers are equally liable for all damage. A famous case establishing this principle in the United States is Corey v. Havener.

Injury or illness is occasioned by a fungible product made by all the manufacturers joined together in a lawsuit. The injury or illness is due to a design hazard, with each having been found to have sold the same type of product in a manner that made it unreasonably dangerous, there is an inability to identify the specific manufacturer of the product or products that brought about the Plaintiff’s injury or illness and there are enough manufacturers of the fungible product joined in the lawsuit, to represent a substantial share of the market. Any damages would then be divided according to the market share ratio.

Since but-for causation is very easy to show and does not assign culpability (but for the rain. you would not have crashed your car — the rain is not morally or legally culpable but still constitutes a cause), there is a second test used to determine if an action is close enough to a harm in a “chain of events” to be a legally culpable cause of the harm. This test is called proximate Cause.

Important Remedies for Breach of Contract