Home Biology What is Protoplasm? 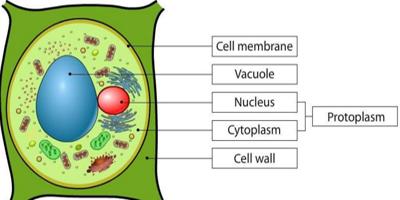 Protoplasm: The jelly-like half liquid, transparent, viscus, and living substance present within the cell wall is known as protoplasm. It is a jelly-like substance known to be the living part of the cell. It is the colorless liquid within a cell that comprises the cytoplasm, nucleus, and organelles.

The term was proposed in 1835 and was known as the primary substance responsible for all the living processes. The celebrated scientist, Huxley mentioned protoplasm as the physical basis of life. Because of different changes of protoplasm, the activities of life can be noticed. It was believed that cells were containers of protoplasm. However, the concept could not explain the origin of structures formed within the cell, primarily the nucleus.

Structure: Structurally, it has three parts, such as

It is the membrane found in all cells that separate the interior of the cell from the outside environment. In bacterial and plant cells, a cell wall is attached to the plasma membrane on its outside surface. The plasma membrane consists of a lipid bilayer that is semipermeable.

Function: The plasma membrane regulates the transport of materials entering and exiting the cell. The cell membrane provides protection for a cell. It also provides a fixed environment inside the cell.

The cytoplasm is the first component of protoplasm. It is present between the cell membrane and the nucleus in a eukaryotic cell. All the organelles are found here. It maintains the cell environment. A cytoplasm maintains the shape of cells and also stores substances required by the organelle.

Function: It is where the organelles with various essential functions are found. The cytoplasm is responsible for maintaining an environment that can allow the different organelles within it to carry out their functions. For example, in plants, the cytoplasm is the site of some very important reactions of photosynthesis.

The nucleus is the second component of the protoplasm. The genetic material of an organism is present in the nucleus. Ribosomes are also found in the nucleus, which is essential for the production of proteins in the cell.

Function: It contains the genetic material of a cell or organism. It also plays a role in controlling the activity of the cell. Additionally, the nucleus is the place where ribosomes, which are essential in creating proteins in the cell, are made.

What is Abnormal Cell Division?