Home Biology What is Bacteria?

The simplest microscopic one-celled chlorophyllous organism which has the underdeveloped nucleus and lacking nucleolus and nuclear membrane is called Bacteria. They are the prokaryotic type of cell. They can synthesize other organic substances by proucing ATP. 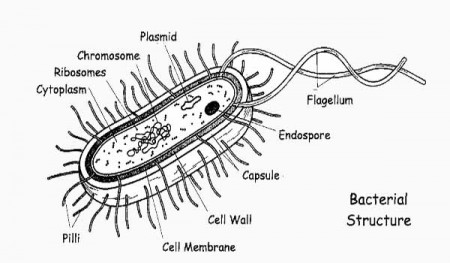 1) They are microscopic organisms.

2) They are unicellular, but many cells can live together in a colony.

3) They are prokaryotic, therefore nuclear membrane is absent.

4) They may be saprophytic or autotrophic in nature.

1) The presence of bacteria is everywhere in the world. It exists everywhere, in soil, water or air, even in dead bodies and organic substances.

2) They are found to live in the intestines of different animals including humans.

3) Plenty of bacteria exist in soil, enriched with organic substances.

4) A great deal of bacteria are found in faecal matters of some animals including humans.

5) They exist in water, enriched with organic substances.

6) The lower part of the atmosphere contains a lot of bacteria.

Human  diseases: It’s cause a number of diseases to humans, such as- Typhoid, Pneumonia etc.

Medicine: Extracts from bacteria are used to prepare antibiotics Such as- Polymixin, Tyrothricin etc.

Industry and Agriculture: Some are used in industries and also in Agriculture.

Definition and Characteristics of Cyanobacteria