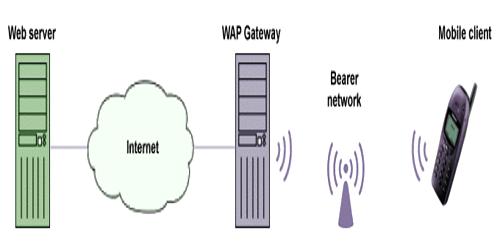 WAP (Wireless Application Protocol) is a specification for a set of communication protocols to standardize the way that wireless devices, such as cellular telephones and radio transceivers, can be used for Internet access, including e-mail, the World Wide Web, newsgroups, and instant messaging. It is a communications protocol that is used for wireless data access through most mobile wireless networks. While Internet access has been possible in the past, different manufacturers have used different technologies. In the future, devices and service systems that use WAP will be able to interoperate. WAP supports most wireless networks. These include CDPD, CDMA, GSM, PDC, PHS, TDMA, FLEX, ReFLEX, iDEN, TETRA, DECT, DataTAC, and Mobitex.

The WAP layers are:

The WAP was conceived by four companies: Ericsson, Motorola, Nokia, and Unwired Planet (now Phone.com). The Wireless Markup Language (WML) is used to create pages that can be delivered using WAP. Mobile users prefer WAP because of its ability to efficiently deliver electronic information.

How Market Report based on Time or Period?

Duties of Company Secretary towards the Board of Directors