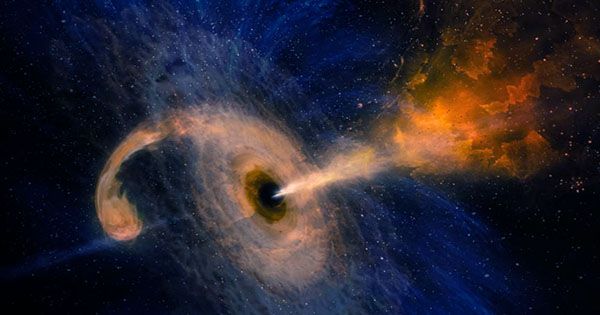 When black holes feed, they emit X-rays, which can bounce off surrounding material and cause “echoes,” as astronomers name them. The first sightings were from massive black holes in faraway galaxies, but two smaller and closer black holes have subsequently reported the same phenomena. For the first time, scientists have translated these “echoes” into sounds, and the results are unsettling. Because the sample size was so tiny, the echoes might have been an uncommon occurrence. According to new study published in the Astrophysical Journal, it’s really considerably more prevalent than previously thought.

The finding of a population with the same impact allows MIT graduate student Jingyi Wang and co-authors to follow the cycle black holes go through to produce these echoes in a way that is impossible to achieve with just one or two examples. The Milky Way is thought to contain tens of millions of stellar black holes, which are the remnants of supernova explosions in stars at least 25-40 times the mass of the Sun, in addition to the supermassive black hole at its center. Because the majority of these objects are undetected unless their gravity impacts a star or they are feeding on material drawn from a neighbor, their number is dependent on modeling.

The X-ray radiation that the feeding minority emits is created by the high temperatures that the gas around the black hole is heated to before to ingestion. Wang and co-authors discovered echoes in 10 of the 26 black holes known to generate X-rays when they feed on material from a partner star, only two of which were previously reported, where the initial flash of X-rays is followed by a delayed reflection. Astronomers can calculate the distance to whatever is reflecting it by measuring the time between the first X-ray burst and the reflected echoes.

The authors develop a scenario of black holes creating a jet of particles blasted out at close to the speed of light, followed by a corona of high-energy photons, by measuring cycles of emissions and intervals. This is known as a “hard state,” and it lasts for several weeks. The black hole then enters a soft stage that lasts weeks to months, with a significantly reduced energy environment surrounding it. A final high-energy flash that lasts a few days marks the shift. All systems’ delays got longer throughout the transition, suggesting that the reflection came from a distance distant from the black hole.

The scientists argue that a flash is caused by a transient expansion of the plasma around the black hole, which ejects high-energy particles. The writers worked with musicologists to convert these electromagnetic pulses into sound, and you can hear the slightly frightening results below.

“We find novel reverberation signatures in eight sources,” Wang stated in a statement. “The black holes are all in binary systems with typical, low-mass, sun-like stars, and their masses vary from five to fifteen times that of the Sun.” “We’re only getting started with using these light echoes to rebuild the ecosystems nearest to the black hole,” co-author Dr. Erin Kara remarked. “Now that we’ve demonstrated that these echoes are prevalent, we can study links between a black hole’s disk, jet, and corona in a novel way.”