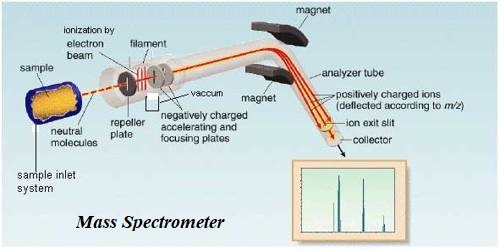 The mass spectrometer was devised by F.W. Aston (1813) and was first applied in the determination of isotopic masses and the relative abundances of isotopes. It is an analytical technique that ionizes chemical species and sorts the ions based on their mass-to-charge ratio.

Mass spectrometry is used in many different fields and is applied to pure samples as well as complex mixtures. The technique has found wide application in the determination of molecular masses of compounds and elucidation of their structures.

A mass spectrometric analysis of a monatomic element reveals the isotopic composition of the element. When calibrated using 12C isotope the relative isotopic masses can be read directly from the stick diagram. Such analysis shows that Neon has three isotopes, 20Ne, 21Ne and 22Ne with relative abundances in the ratio 114 : 0.2 : 11.1. This is shown in the form of a stick diagram in Figure. 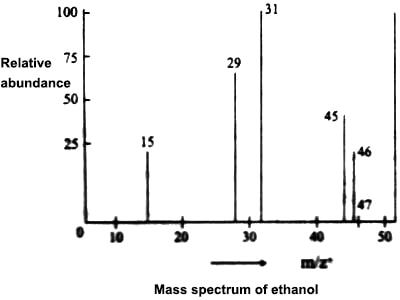 Figure: Fragmentation of the ethanol molecule.

How a Mass Spectrometer Works?