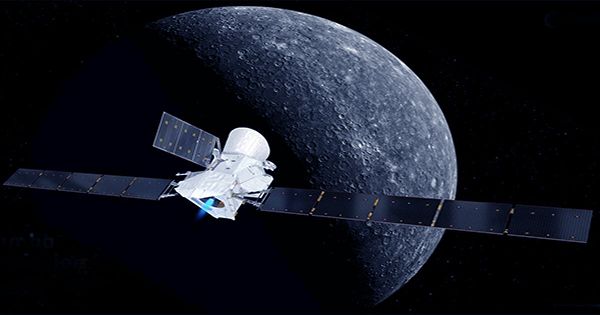 BepiColombo will fly by Mercury for the first time today, the first of six flybys it will make on its mission to begin researching the tiniest planet in 2025. The mission will fly barely 200 kilometers (124 miles) from the surface of the innermost Solar System world at 11:34 p.m. UTC (6:34 p.m. ET) on October 1, acquiring its first photographs and science data of Mercury. BepiColombo is a European Space Agency (ESA) and Japanese Space Agency (JAXA) partnership that consists of two orbiters that will separate into complimentary orbits. The mission will gain a better understanding of Mercury than it has ever had before, and it will begin tonight.

In a statement, Johannes Benkhoff, ESA’s BepiColombo project scientist, said, “We’re really looking forward to seeing the first results from measurements conducted so near to Mercury’s surface.” “In January 2008, when I started working as a project scientist on BepiColombo, NASA’s Messenger spacecraft was making its first flyby at Mercury. It is now our turn. It’s a wonderful sensation!”

The recent flyby of Venus, which used to propel the spacecraft towards the inner Solar System, allowed mission control to tweak the trajectory slightly, and they now expect the spacecraft to pass Mercury at a height of 198 kilometers (123 miles). The mission team’s ability to have an uncertainty of just 2 kilometers (just over 1 mile) from a distance of 100 million kilometers is very remarkable. It wills, however, a quick visit. BepiColombo is traveling too quickly to enter orbit, so it will swing past the planet instead. The next five scheduled passes will use the planet’s gravity to slow it down sufficiently for it to enter orbit by December 2025.

Mercury’s next flyby will occur in June of next year, followed by one a year later in 2023, two in 2024, and one in 2025, with the orbital insertion taking place in December of that year. It will have taken three years, two months, and many assisted gravity flybys for Bepi to arrive. Getting into the inner Solar System is not easy.

This appears to be illogical. Because the Sun is the largest object in the Solar System, it would appear that anything thrown there would fall inwards. That is correct, as long as the object is not already orbiting the Sun. When we launch a rocket into space, it travels at the same speed as the Earth as it orbits our star. That speed prevents the Earth from rolling in, but if you want to launch your rocket closer to the Sun, you will need to slow it down significantly, enough to match Mercury’s speed in this situation. Using chemical propulsion for this is prohibitively expensive. Using the gravitational attraction of planets as a cosmic brake, on the other hand, slows and bends a craft’s trajectory towards the Solar System’s inner reaches. In the 1970s, NASA used this maneuver to send the Mariner 10 probe to Mercury, which was conceived by Italian mathematician and engineer Giuseppe “Bepi” Colombo.

Elon Musk Thinks Almost Anyone Can Afford $100,000 Ticket to Mars