You are here: Home Biology Describe Transpiration of Plants with Types

Transpiration: The physiological process by which the excess water is lost from the living tissues of plants in the form of vapor is called transpiration. It is the procedure in which plants discharge the water inside it in the form of moisture or water vapor. Parts of plants like stems, small pores on leaves, flowers evaporate the water to the atmosphere.

Types: On the basis of the passages through which plants give out water in the form of vapor transpiration is of three types: 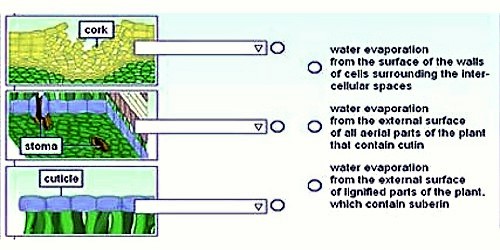 Transpiration that occurs through stomata called stomatal transpiration. Water vapor diffuses out through minute pore (stomata) present in soft aerial part of the plant is known as Stomatal Transpiration. This type of transpiration only occurs in its presence of sunlight (in daytime). Because stomata open in the presence of sunlight and close in the darkness. Liquid water is first absorbed by the plant through its roots from the soil. Either at the surfaces of the mesophyll cells or of the epidermal cells closes to stomata, liquid water is converted to water vapor. It then escapes through the stomatal pore at the time when it is open to allow entry of CO2 and release of O2.

In this method plants give out 80-90% water in the form of vapor. Of the total water loosed, near about 85 – 90% of water loosed by the stomatal transpiration.

Loss of water might also take place through the cuticle, but the amount so lost is comparatively small and makeup only about 5 to 10 percent of the whole transpiration. This type of transpiration depends upon the thickness of the cuticle and presence or absence of a wax coating on the surface of the leaves.

Lenticels and the transpiration that takes place through term is known as Lenticular Transpiration. The lenticels are tiny openings that protrude from the barks in woody stems and twigs as well as in other plant organs. In this process, only 0.1% of water is given off of the forms of vapor.

Effect of Transpiration on Plants: