With the aim of producing silk fiber and manufacturing silken clothes the overall process of rearing of the silk culture or silk worm scientifically and to collect silk fibers from their cocoon is known as sericulture. Commercially its cultivation is very profitable.

The life cycle of mulberry silk worms: The life of an animal from zygote to sexually mature adult stage through gradual development is known as its life cycle. The stages of life cycle of animal rotate in a cycle. In the life history of all the species of silkworm in general, there are four stages which rotate in cycles e.g. ( a) egg (b) larva (c) pupa and (d) adult. 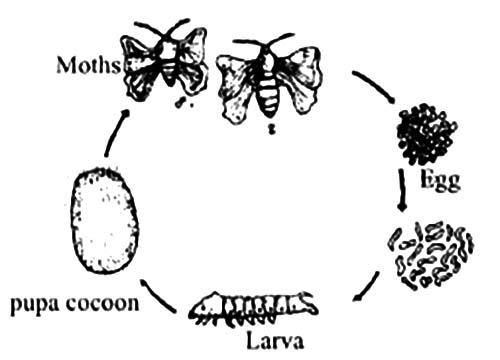 (1) Egg collection: The male and female silk moths mate soon after emerging from the pupal case. The egg is fertilized in the body of the female and the zygote is formed. Immediately after that the male worm dies and the female worm starts to lay eggs. The female worm is allowed to lay eggs, for the purpose with a piece of paper spread in a basket. The eggs become attached on the paper of the basket with the help of a kind of sticky secretion secreted from the body of the female moth. A single female may lay 300 – 500 eggs at a time. The eggs look like mustard grains or small beads, yellowish in colour. The larva or polo hatches out from the eggs within 8 – 10 days in summer and it may take a little more time if the temperature is less.

(2) Larva: The larva is narrow, small and brownish in colour. On the head there is a pair of small sensory appendage and on the thoracic region there are three pairs of segmented legs with claws. The claws are used to hold the mulberry leaves at the time of eating. There are five pairs of un-segmented pralegs on the abdomen of the larva. They help in locomotion. The larval stage is the active stage which lasts 20-25 days in summer. The larvae are supplied with pieces of tender leaves of mulberry and they grow larger gradually. They shed their cuticle four times. The adult larva grows about 60mm long and if more mulberry leaves are supplied to them the body growth becomes more satisfactory. From large larvae large cocoons are produced which yield better type of silk. At the end of the larval stage the pupal stage starts.

(3) Pupa: At the end of larval stage the silkworm stops eating leaves and their body shrinks. When the larva forms cocoons round the body by winding the head within the cocoons, they stay and form the pupae, from the juice secreted by the salivary glands of which the fibers come out. The fibers come in contact with the air and harden to form egg shaped cocoons which takes 3 – 4 days. The pupa then is transformed into adult moths. At this stage they do not eat anything and remain inactive. After 8 – 10 days the pupal stage is over and the moths come out by cutting one end of the cocoon.

(4) Adult Moth: The adult moth has a pair of long plumose Antenna on the head. They have three pairs of legs in the thorax and two pairs of wings on the dorsal side, but the moth cannot fly well. The male moth survives generally one day and female 3-4 days. After laying eggs the female moth dies.

Method of Artificial Bee Culture and Collection of Honey

Essential Characteristics of an Ideal Pond for Carp Culture

Diseases of Fishes and Their Treatment