The comparing step determines the degree of variation between actual performance and standard. If the first two phases have been done well, the third phase of the controlling process – comparing performance with standards – should be straightforward.

This step involves a comparison of actual performance with the standard. Such a comparison will reveal the deviation between actual and desired results.

The comparison becomes easier when standards are set in quantitative terms. For instance, the performance of a worker in terms of units produced in a week can be easily measured against the standard output for the week.

(a) Improving the motivation level of employees.

(c) Improving the quality of products.

Thus, standards proceed as a lighthouse that warns and guides the ships at sea. Standards are the benchmarks towards which efforts of the whole organization are directed. 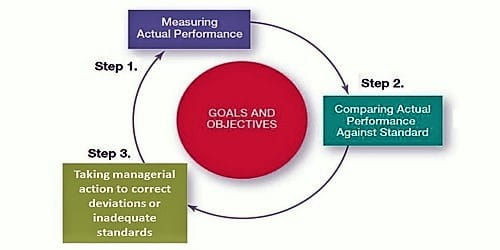 This is the first step of the control procedure. Before we start any other work, the managers need to set the standards against which the actual performances will be measured. These performance standards can be in the form of goals, such as revenue from sales over a period of time. Before these standards are set an appropriate study of the economy, situation and probability must be done so that the standards set are practical in nature. The standards should be attainable, measurable, and clear.

It is initiated by the manager who corrects any defects in actual performance. This brings us to the final step of the control process. If the deviations in the third step are in an unacceptable range, then the firm needs to improve their performances. And the management must take action to get better the actual performance of the firm in those problem areas. After the reasons for deviations have been indomitable, managers can then build up solutions for issues with meeting the standards and make changes to processes or behaviors.