Home Business Classification of Bank on the basis of Function 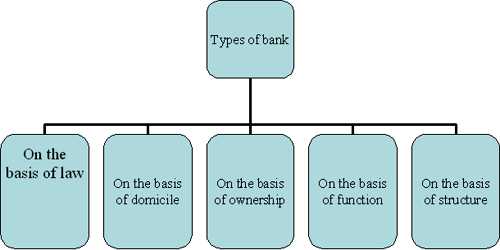 Classification of Bank on the basis of Function

At present, the word “Bank” is considered as an economic term in all country. Banks are the financial institutions that are licensed to deal with money and its substitutes by accepting time and demand deposits, making loans, and investing in securities. It is a financial institution licensed to receive deposits and make loans. There are two types of banks: commercial/retail banks and investment banks.

Here classifications of banks on the basis of function are described as follows:

Banks that take a deposit as a loan at minimum interest and form the surplus unit and provide it as the loan and advances to the deficit unit at maximum interest. Since their deposits are for a short period, these banks normally advance short-term loans to the businessmen and traders and avoid medium-term and long-term lending. Profit is the ultimate goal for these banks.

To establish an industry, enough capital is needed. The banks which help in the industrial sector and preside long and the short-term loan is known as the Industrial Bank. These banks mainly meet the medium-term and long-term financial needs of the industries. Such long-term needs cannot be met by commercial banks, which generally deal with short-term lending.

This kind of bank is dedicated to financing the new and upcoming project. So, it needs to work as a medium between the investors and the business. The principal function of these banks is to collect small savings across the country and put them to productive use. These Banks have shown marked development in Germany and Japan.

Merchant banking is one kind of intermediary baking which is issuing L/C, endorsement of bills, a collection of bills, etc. are the main task of the merchant bank.

Saving is the precondition of capital formation in the country. In this sense, to encourage the students of schools in banking and in savings, school bank is established. They open accounts and issue postal cash certificates.

In the USA some specialized banks are established to provide a loan to the consumers to buy their daily need. These banks issue a credit card, by which one can easily buy their needs. They are called as retail banks and at present retail banks accept retail deposits and lend retail loans namely; housing loans, personal loans, and vehicle loans.

The bank which is developed to do the multipurpose task is known as the mixed bank. This bank is commercial as well as specialized.

TThe Regional bank is established to develop a special region. These banks finance their member country. Asian Development Bank (ADB), Islamic Development Bank (IDB), etc are such kind of regional bank. They facilitate international payments through the sale, purchase of bills of exchange, and thus play an important role in promoting foreign trade.

United Nations or any other regional organization sometimes established banks for economic development. These kinds of bank have a huge contribution to the developing countries. World Bank, International Monetary Fund is such kind of bank. Their principal function is to make credit arrangement for the exports and imports of the country and these banks deal in foreign exchange.

Define and Describe on Partnership Deed

Main Elements of a Life Insurance Contract or Policy