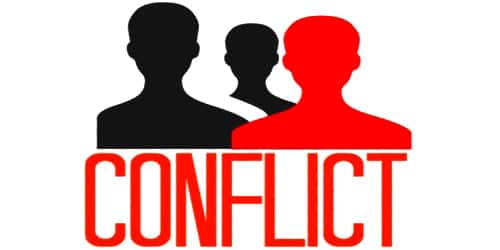 Conflict is defined as the behavior due to which people differ in their feelings, thought and/or actions. It is a human incident which had its origin from the very creation of human beings. The term ‘conflict’ refers to a clash or disagreement, often violent, between two opposing groups or individuals or between the two-selves of a similar individual. It means the dissimilarity between people due to some conflict or opposition status and perceived contradiction. Conflict engenders in human nature and inborn nature because of his possessing diverse opinions, dissimilar viewpoints, likings, and disliking. It is also a human affinity to hold his own faith or judgment or assessment to be right and enhanced than those of any other person or persons and therefore, aggression, hostility, and even war are expected which demolish agreement, security, and peace in life. It is caused by many reasons including differences in values, desires, needs, habits, and wealth.

Conflict can be expressed in many ways, such as; war, hate, violence, bullying, and competitiveness. It may have a variety of reasons involving person, partisan, ideological, communal, religious, moral, racial, social, political, national and worldwide issues. An American psychologist divides conflicts into three key types arising out of three dissimilar causes, such as – Economic, Value, and Power conflict. It has harmful effects on people. It can result in death, mental sickness, suicide, and devastation. Conflict is an obligatory part of human life. They can have a variety of reasons and dissimilar scales. They are further classified into four types, such as (a) Interpersonal conflict, (b) Intrapersonal conflict, (c) Intergroup conflict and (d) Intragroup conflict. There are some situations in which we can simply avoid conflict, and it is by far the more prudent course of action to do so. Uncontrolled and deliberate conflicts beget enmity, hostility, violence, war, and destruction.

Hamlet’s problem ‘to be or not to be’ represents every man’s struggle within his inner selves. But tolerable and moderate conflicts have some positive effects developing in us a sense of tolerance, realization, understanding, compromise, and capacity for reconciliation. So, conflict means a struggle or problem between two opposing groups or individuals. However, it is man’s eternal quest for peace and harmony and struggles against conflict and war.