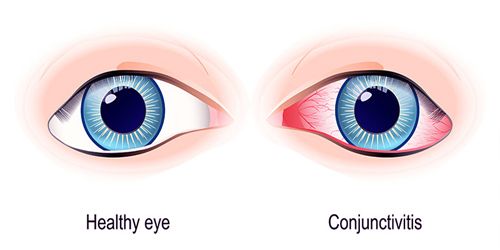 Conjunctivitis is inflammation of the conjunctiva, a thin, delicate membrane that lines the eyelids and covers the eyelids. Conjunctivitis is a common disease of the extreme eye because the conjunctiva is constantly exposed to microorganisms and environmental agents that can cause infections or allergies. The viral infection can be accompanied by other symptoms of the common cold. Both viral and bacterial infections spread easily in humans. Conjunctivitis can be acute or chronic depending on how long the condition lasts, the severity of the symptoms, and the type of organism or agent. It can also affect one or both eyes, and if it is caused by an infection, it can easily spread to other people during physical contact, especially in day-care centers. Some forms of conjunctivitis are highly contagious and easily spread to school and home. Although conjunctivitis is usually a brief infection of the eye, it can sometimes become a more serious problem. Diagnosis is often based on signs and symptoms. Occasionally discharge samples are sent for culture.

Conjunctivitis can be caused by a viral infection caused by a cold, acute respiratory infection, or a disease such as measles, herpes simplex or herpes zoster. Symptoms include mild to severe discomfort in one or both eyes; Redness; Eyelid swelling; And watery, yellow, or green discharge. Symptoms can last anywhere from a few days to two weeks. An adenovirus infection, however, can cause pus-like discharge and a scratch on the eye, a foreign body-type sensation as symptoms. It can also be accompanied by swelling and tenderness of the lymph nodes near the ear. Conjunctivitis can also be caused by environmental risks from air, smoke, dust and pollen, dust, or grass allergens. Symptoms range from itching and redness to mucus discharge. People who wear contact lenses and who are infected with gonorrhea or chlamydia should be treated. Allergies can be treated with antihistamines or mast cell inhibitor drops.