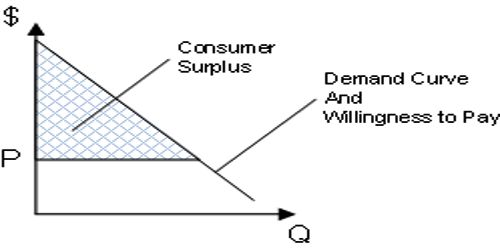 Willingness to pay (WTP) is the maximum amount an individual is willing to sacrifice to procure a good or avoid something undesirable. It is a term for the highest price a consumer will pay for one unit of a good or service. The market price only tells us the minimum amount that people who buy the good are willing to pay for it. When people purchase a marketed good, they compare the amount they would be willing to pay for that good with its market price. They will only purchase the good if their willingness to pay is equal to or greater than the price. Many people are actually willing to pay more than the market price for a good, and thus their values exceed the market price. If the government proposed raising taxes to increase the number of police officers, most people would be against the idea. Willingness to pay varies, depending on people’s circumstances. Citizens of Saudi Arabia’s willingness to pay for potable (drinkable) tap-water is significantly greater than for Britons, where there are lots of rivers, lakes, and regular rainfall.

In order to make resource allocation decisions based on economic values, what we really want to measure is the net economic benefit from a good or service. For individuals, this is measured by the amount that people are willing to pay, beyond they actually pay.

Synergy in Merger or Acquisition