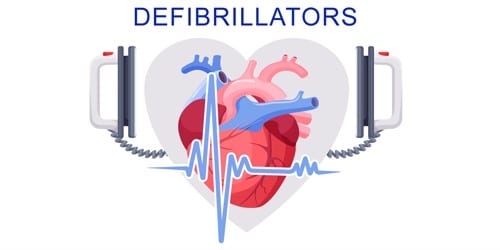 Defibrillation should not be performed on a throbbing patient or a patient with caution, as it may cause severe heart rhythm disturbances or cardiac arrest. Fibrillations stop the heart from pumping blood, causing brain damage and/or cardiac arrest. Heart promises to lose about 10% of the heart’s ability to restart every minute. Death can occur within minutes if normal heart rhythms are not restored through defibrillation. The rhythm of a productive heart, capable of producing a pulse, is not restored with defibrillation unless death occurs within minutes. Immediate defibrillation is important for patient survival because the American Heart Association has called for the integration of defibrillation into an effective emergency cardiac care system. A defibrillator is an electronic device with electronic card leads and paddles. During defibrillation, paddles are placed on the patient’s chest, caregivers stand back and electric shocks are provided. Early defibrillators, about the size and weight of car batteries, were primarily used in ambulances and hospitals. The American Heart Association now supports public access defibrillation; For this, it is called to keep automatic external defibrillators (ADS) in police vehicles, aircraft, and public functions, etc. These are computerized to provide simple, verbal instructions to the operator and to make it impossible to shock a patient whose heart is not fibrillating. The possibility of installing AEDs could be extended to many public places.

Depending on the type of device used or required, defibrillators can be external, transferable, or implantable (implantable cardioverter-defibrillator). Another development was the Implantable Cardioverter-Defibrillator (or ICD), developed by a team of people at Sanai Hospital in Baltimore, including Stephen Hellman, Alois Langer, Jack Latucha, Morton Moore, Michelle Miroski and Mir Imran. In Baltimore, the device was made by Pittsburgh Intake Systems. Some external units, known as automated external defibrillators (ADs), automate the detection of treatable rhythms, meaning that reactants or bystanders are able to use them successfully with little or no training.