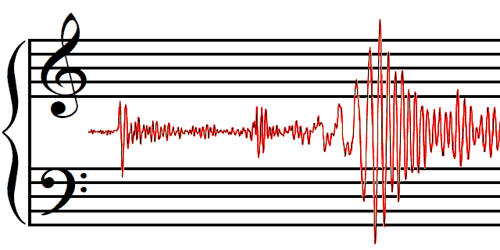 We hear different kinds of sounds every day. We hear the sound of vehicles, the sound of the market, the sound of rainfall, the sound of musical instruments, etc every day. Some of these sounds are sweet and some are harsh. If we judge by our sensation the sweet sounds are musical sounds. It is a tone with characteristics such as controlled pitch and timbre. Musical sounds are distinguished from noises in that they are composed of regular, uniform vibrations, while noises are irregular and disordered vibrations.

The characteristics of musical sound:

One musical tone is distinguished from another on the basis of pitch, intensity, or loudness, and quality, or timbre. The three characteristics of musical sounds are-

The characteristic of musical sound by which we can differentiate between a shrill sound and a dull sound of the same intensity is called pitch. Pitch describes how high or low a tone is and depends upon the rapidity with which a sounding body vibrates, i.e., upon the frequency of vibration. It is the characteristics of a musical sound which depends upon the frequency. It depends on the frequency of the source. With the increase of frequency, the pitch becomes higher making the note more and more shrill. The sound with low frequency is low pitch able sound and the sound with high frequency is high pitch able sound. Greater the frequency of a musical note, higher is the pitch. It is the sensation conveyed to the brain by the sound waves falling on the ears.

The characteristic of musical sound by which we can differentiate between two sounds of the same intensity and pitch is called quality or timbre. It measures the complexity of sound. The quality of sound depends upon the number and intensity of harmonics. It is determined by the number of harmonics present, their order, and relative intensities.

There are two membranes in our vocal which are known as vocal cords. The sound is produced due to the vibration of vocal cords and so people can speak. Due to the different harmonics present in the voices, we characteristics of sound are called Quality or Timber.