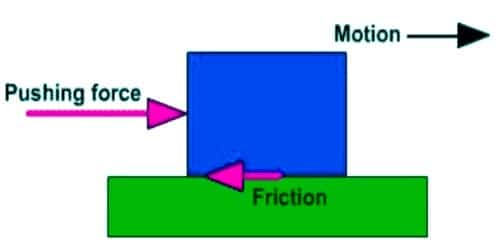 Friction makes many troubles to displace one body from one place to another. Let, you want to displace a massive box on the floor. If the friction of the contact surface is large enough, then it takes a lot of labor to displace it. By polishing or smoothing the surface it can be decreased. Friction between two surfaces can be reduced by polishing them. The interlocking and projections are minimized by this technique. The friction due to air is reduced by making the automobiles streamline.

There are wheels on bus, truck and many types of machinery. The wheel is an ingenious invention. Its circular shape reduces friction to a minimum. Without wheel was it possible to use this machinery? Using the wheel in a suitcase reduces the friction and it becomes easier to pull it. The value of the rolling friction in comparison to the sliding friction is reduced greatly due to the attachment of wheels.

Oil, Mobil, and grease like materials are called lubricants or greasy materials in short. A layer of lubricant between the two surfaces can greatly reduce friction. So, lubricants are used between the moving parts of an engine. In addition, we use oil in the sewing machine, lock, and hinges. We can reduce the friction by using lubricant and increase it by making the surface rough and removing the ball bearing, lubricant, etc.

Another important invention similar to the wheel is the invention of a ball bearing. It was possible to reduce the friction greatly between the surfaces by using ball bearing. Ball bearings are the small, smooth metal balls. Generally, these are made of steel. Ball bearings are placed between the moving parts of a machine. As the rolling friction less than the sliding friction therefore in rotating equipment, the shafts are fixed on the ball bearing so that the friction can be reduced significantly. They roll around so that the moving parts of the machine do not rub against each other directly. That is, the surfaces roll over one another instead of sliding and friction reduces.

For example – the freewheel of a cycle, the axle of a motorcar, the shafts of the motor dynamo, etc. are provided with ball-bearing. There are uses of ball bearing in car’s wheel, cycle and electric fan [below figure].

Increasing friction – By making the surface rough friction can be increased.

Without friction in the road, the tyres of a car will just spin around at the same spot. Possibly you have seen how truck and bus is blocked in a slippery or muddy road in the rainy days. What is the reason behind this? This is due to the large decrease in friction. So friction is to be increased according to the necessity. The car tyres are so designed that they are able to grip the road properly and create necessary frictional force. Therefore the surface of the tyres is designed with treads i.e. grooves and teeth. In the rainy days, the water or mud enters the grooves and water and mud are thrown outside boldly. As a result, the tyres are able to grip the road surface well. i.e. friction can be increased by making the surface rough. Examples of increasing friction – the tyres of a motor car and bicycles are made rough to increase the friction when the surface becomes greasy after rain or water splashing it is made rough by spreading sand to increase the friction.

Mountain climbers need to grip the rock or mountain surface with their hands and feet, in order to climb a mountain. They use chalk powder to grip the rock. There are spikes under the boot of players so that they do not fall down while running.

Some Common Method to increase friction is –

Explain Effect of Force on Motion

Explain Angular Momentum of a Particle