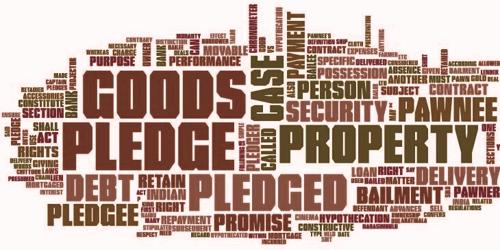 A pledge is a bailment that conveys possessory title to property owned by a debtor (the pledgor) to a creditor (the pledgee) to secure repayment for some debtor obligation and to the mutual benefit of both parties. The term is also used to denote the property which constitutes the security.

It is defined in the following words, “Bailment of goods as a security for the payment of a debt or performance of a promise is called pledge.”

Bailor is called pledgor or “Pawnor” and Bailee is called “Pawnee” or pledgee.

Example: Mr. XYZ borrows $ Ten thousand from Mr. ABC and keeps his motorcycle as security for payment of the debt. The bailment of a motorcycle is called pledge.

Following are the important essentials of the pledge:

What is banker’s right of set-off?