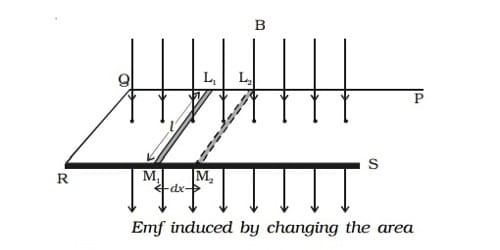 Electromotive force (EMF) is the characteristic of any energy source capable of driving electric charge around a circuit. It is abbreviated E in the international metric system but also, popularly, as emf. According to Faraday’s law of electromagnetic induction, an emf is induced in a circuit when magnetic flux linked with it changes. This emf is called induced emf.

We know that the induced emf is given by the expression

Hence, the induced emf can be produced by changing

(i) the magnetic induction (B)

(ii) the area enclosed by the coil (A) and

(iii) the orientation of the coil (θ) with respect to the magnetic field.