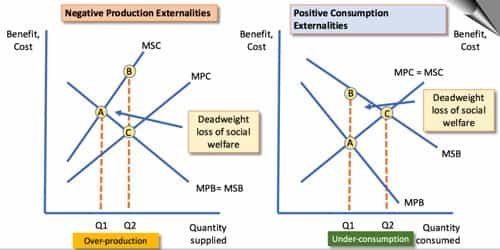 An externality is a positive or negative consequence of an economic activity experienced by unrelated third parties. It is the side effect on an individual or entity due to the actions of another individual or entity. For example, the production of energy in a nuclear power plant benefits the owners of the power plant but creates externalities in the form of radioactive waste for the environment and its inhabitants. It a consequence of an industrial or commercial activity which affects other parties without this being reflected in market prices, such as the pollination of surrounding crops by bees kept for honey.

Externalities are a loss or gain in the welfare of one party resulting from an activity of another party, without there being any compensation for the losing party. Externalities are an important consideration in the cost-benefit analysis. An externality can be either positive or negative.

Example: Pollution emitted by a factory that spoils the surrounding environment and affects the health of nearby residents is an example of a negative externality. An example of a positive externality is the effect of a well-educated labor force on the productivity of a company.

A common negative example includes cigarette smoking, which can create passive smoking, drinking excessive alcohol, which can spoil a night out for others, and noise pollution.

Roles and Importance of Internal Communication