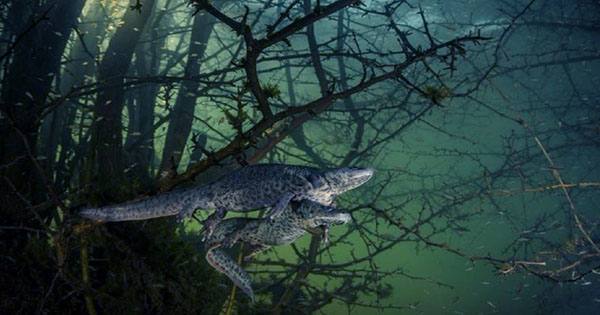 The winner of the Natural History Museum’s 2021 Wildlife Photographer of the Year Competition has been announced, and the photograph is very intriguing. Laurent Ballesta, a French underwater photographer and biologist, spent half a decade working on his shot “Creation,” which represents the creation of a future generation of groupers as a billowing cloud of sperm and eggs.

Ballesta made an appearance in the “Making Of” part of Blue Planet II’s Coral Reefs, an episode in which the painstaking efforts of a crew aiming to capture the mating activity of groupers in French Polynesia are shown. Because it occurs on a single evening, which is difficult for even ocean scientists to forecast, the yearly spawning event for these fish presents unique challenges for underwater videographers and photographers. When it eventually starts, you have to contend with swarms of grey reef sharks, and you have got yourself a battle.

After missing the spawning event totally (timing is tough work with only “the full moon in July” to go on), the Blue Planet team returned a year later, this time with Laurent Ballesta’s Blancpain/National Geographic team in tow. The camera operators had to dive wearing chainmail to protect themselves from coral sharks that might become too fascinated by the electric currents around their video equipment. In the end, five seasons of recording attempts yielded a total of less than an hour of video for the series.

Ballesta certainly succeeded in capturing the massive spawning event in a single image throughout the course of his many years photographing and filming groupers and grey reef sharks. This achievement is even more astounding when you consider that a single grouper’s spawn takes only a few seconds, and the entire congregation (which numbers in the thousands) will be finished in under an hour. Are there any mathematicians up for the task of calculating the probability of snapping this single, spinning moment? I did not think so.

Rosamund ‘Roz’ Kidman Cox OBE, chair of the judging panel, writer, and editor, said in a statement to IFLScience, “The image works on so many levels.” “It has an ethereal beauty and is startling, lively, and engaging.” It also captures a wonderful moment – a genuinely explosive genesis of life – by suspending the tail-end of the egg exodus like a symbolic question mark for a brief minute.”

A ghost pipefish in the tangle of a feather star, fascinating silk spinning, and sad views of human effect on animals, from a grey seal bound in rope to a performing elephant, are among the other award-winning entries. These and other winners will on display from October 15 at the Natural History Museum in London in the Wildlife Photographer of the Year Exhibition. Do you want to be inspired? The entry period for the 2022 tournament begins on October 18, 2021, and ends on December 9, 2021. It is time to start looking through those portfolios!

Pass the AWS Certification Exam with this $35 Training