Home Business How Agency Problem can be solved? 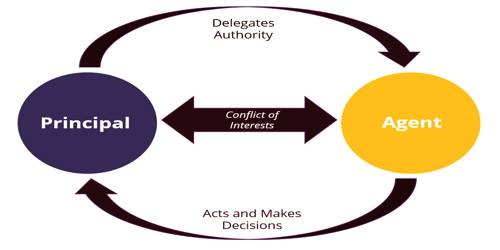 Most firms today use a package of economic incentives, along with some monitoring, to influence a manager’s performance and thus reduce the agency problem. The following incentives or factors that motivate managers are discussed below:

(a) Performance-based compensation plans: Managers compensation usually depends on the company’s performance. If any organization is performing better the manages can be compensated and the compensation can be in the form of

(b) Direct intervention by shareholders: Although a great deal of stock is owned by individuals, an increasing percentage is owned by institutional investors such as insurance companies, pension funds, and mutual funds. These institutional investors can enforce a firm’s managers for improving their performance and sometimes give suggestions regarding how the business should be run.

(c) The threat of firing: The CEOs or other top executives can be forced out of office due to the company’s poor performance.

(d) The threat of takeover: Hostile takeover is most likely to occur when a firm’s stock is undervalued relative to it’s potentially a hostile takeover, the managers of the acquired firm are generally fixed. Thus, managers have a strong incentive to take, actions which maximize stock prices and possible to avoid taking over.

Difference between NPV and IRR