Home Business How the right of subrogation arises? 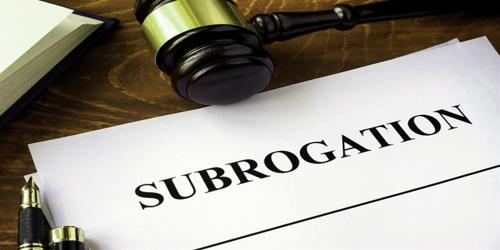 Subrogation refers to the process an insurance company uses to seek reimbursement from the responsible party for a claim it has already paid. It is a term describing a legal right held by most insurance carriers to legally pursue a third party that caused an insurance loss to the insured.

Subrogation is generally the last part of the insurance claims process. In most cases, the insured person hears little about it. It’s something that happens between insurance companies.

The right of subrogation arises in the following ways:

Under tort: This is a wrongdoing to another. A person cannot be wrong to another thereby causing damage to another’s property of influencing injury to the person of that another. If it is so done then alright of action accrues-in favor of the wronged arid to the determent of the wrongdoer.

Under statue: Statues may also create liability for making compensation, arising out of a breach thereof Examples are, Factories Act, Occupies Liability Act, The Riot Act and carriage of goods by sea act etc.

Subrogation arises in property/casualty insurance when a company pays one of its insured’s for damages, then makes its own claim against others who may have caused the loss, insured the loss, or contributed to it.

An insurance contract is a contract of Uberrimae Fidei – Explain