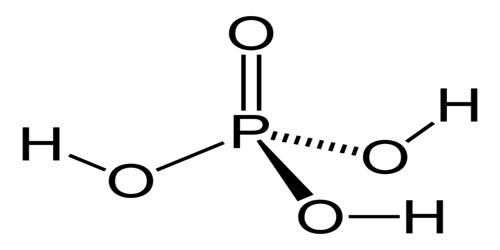 It is an acid-containing four atoms of oxygen, one atom of phosphorus, and three atoms of hydrogen. It is also known as phosphoric (V) acid or orthophosphoric acid.

(1) Ortho Phosphoric Acid (H3PO4) is prepared by dissolving phosphorus pentoxide in water and boiling the solution.

(2) Laboratory preparation: In the laboratory, orthophosphoric acid can be prepared by boiling a mixture of red phosphorus with 50% nitric acid in a flask fitted with a reflux condenser on a water bath till no more oxides of nitrogen are liberated.

Iodine acts as a catalyst. The product is evaporated below 453 K and then cooled in a vacuum desiccator surrounded by freezing mixture when crystals of orthophosphoric acid are deposited.

This fusion should be effected in a platinum crucible since phosphoric acid when heated to redness attacks either glass or porcelain. The acid if examined after this exposure to heat is found although its composition remains the same to have acquired new properties.

However, as phosphoric acid has further -OH functionalities triphosphates may also be formed. Salts of phosphoric acid are solid and many are relatively water-insoluble unless a strong mineral acid is present.

What are the Characteristics of P-block Elements?