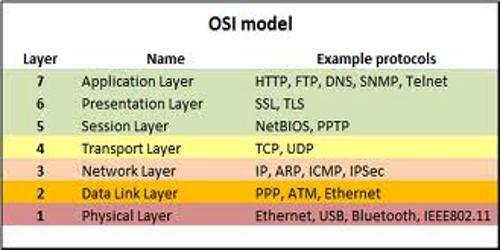 The OSI, or Open System Interconnection, model defines a networking framework to implement protocols in seven layers. Control is passed from one layer to the next, starting at the application layer in one station, and proceeding to the bottom layer, over the channel to the next station and back up the hierarchy.

There’s really nothing to the OSI model. In fact, it’s not even tangible. The OSI model doesn’t do any functions in the networking process; it is a conceptual framework so we can better understand complex interactions that are happening. The OSI model takes the task of internetworking and divides that up into what is referred to as a vertical stack that consists of the following layers:

Physical (Layer 1): This layer conveys the bit stream – electrical impulse, light or radio signal – through the network at the electrical and mechanical level. It provides the hardware means of sending and receiving data on a carrier, including defining cables, cards, and physical aspects. Fast Ethernet, RS232, and ATM are protocols with physical layer components.

Data Link (Layer 2): At this layer, data packets are encoded and decoded into bits. It furnishes transmission protocol knowledge and management and handles errors in the physical layer, flow control, and frame synchronization. The data link layer is divided into two sublayers:

The MAC sublayer controls how a computer on the network gains access to the data and permission to transmit it. The LLC layer controls frame synchronization; flow control and error checking. Layer 2 Data Link examples include PPP, FDDI, ATM, IEEE 802.5/ 802.2, IEEE 802.3/802.2, HDLG etc. 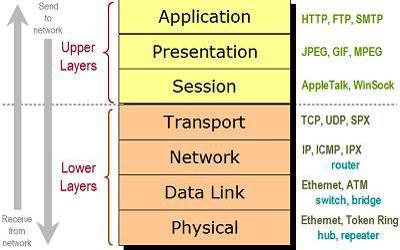 Presentation (Layer 6): This layer provides independence from differences in data representation (e.g., encryption) by translating from application to network format, and vice versa. The presentation layer works to transform data into the form that the application layer can accept. This layer formats and encrypts data to be sent across a network, providing freedom from compatibility problem. It is sometimes called the syntax layer.

Social roles and responsibilities of an organization

Business Value of the Internet