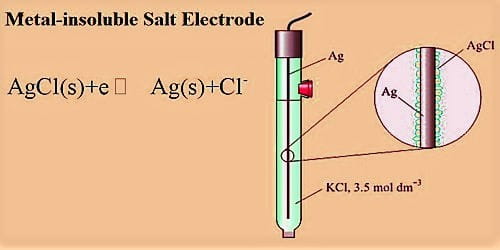 The electrode reaction can be considered as taking place in mo steps:

The electrode reaction involves only the concentration of Cl–; the electrode is said to be reversible with respect to Cl–. The above reaction shows how an electron can be released or taken up in such an electrode. Another example of a metal insoluble salt electrode is the mercury, mercurous sulfate electrode Hg, Hg2SO4(s)│SO42+ (c) used in the standard Weston cell.

The most frequently used electrode of this type is the calomel electrode, which consists of mercury in contact with mercurous chloride (calomel) as a paste, over which is placed a solution containing chloride ions, usually KCl. The electrode which is represented as Hg, Hg2Cl2(s) / C– (c) is shown in Figure. The electrode is usually made with 0.1 mol L-1 or saturated KCl solution. A paste of mercury and calomel is first made by thorough grinding. This is then washed several times with small portions of the KCl solution. The paste is placed in the clean electrode vessel in which some amount of pure mercury had already been placed. The rest of the vessel is then filled with the KC1 solution. A tube at the end of which a piece of platinum wire is sealed is placed in the vessel as shown in Figure. 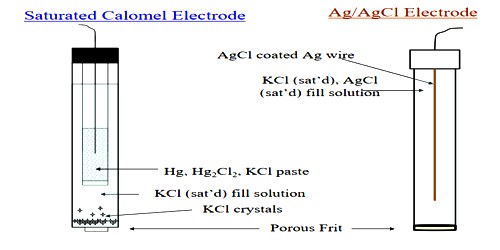 Some mercury is placed in this tube. Contact with mercury in the vessel is made by dipping a thick copper wire in the mercury in the tube. Examples of this type of half cell, when used as a cathode, are Cu2+ | Cu, Zn2+ | Zn, Ag+ | Ag, Sn2+ | Sn, etc. The half cells or electrodes used in Daniel cell are of the metal-metal ion type.