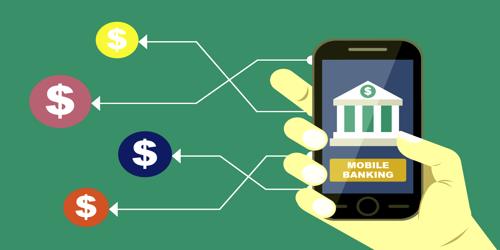 Mobile banking (also known as M-Banking) is a term used for performing balance checks, account transactions, payments, credit applications, and other banking transactions through a mobile device such as a mobile phone or Personal Digital Assistant (PDA). It is the act of making financial transactions on a mobile device (cell phone, tablet, etc.). The earliest mobile banking services were offered over SMS, a service known as SMS banking.

With the introduction of the first primitive smartphones with WAP support enabling the use of the mobile web in 1999, the first European banks started to offer mobile banking on this platform to their customers. Mobile banking has until recently (2010) most often been performed via SMS or the Mobile Web. Apple’s initial success with iPhone and the rapid growth of phones based on Google’s Android (operating system) have led to increasing use of special client programs, called apps, downloaded to the mobile device. This activity can be as simple as a bank sending fraud or usage activity to a client’s cell phone or as complex as a client paying bills or sending money abroad.

Mobile banking refers to the use of a smartphone to perform online banking tasks while away from your home computer, such as monitoring account balances, transferring funds, bill payment etc. Advantages to mobile banking include the ability to bank anywhere and at any time. Disadvantages include security concerns and a limited range of capabilities when compared to banking in person or on a computer.

All cheques are bills but all bills are not cheques – Explanation