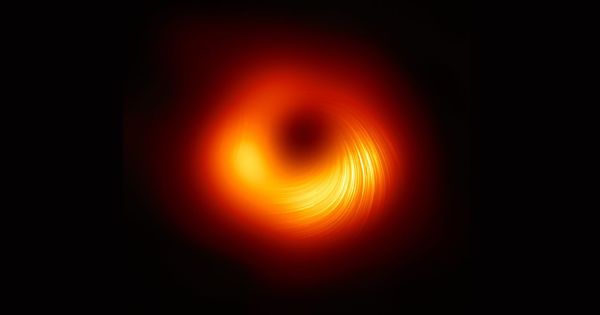 The Event Horizon Telescope (EHT) has created a new image that shows details of the magnetic fields in the region closest to the supermassive black hole at the galaxy’s core, M87. The new research gives astronomers important clues about how powerful material jets can be produced in that region.

A global team of astronomers used the Event Horizon Telescope, a collection of eight telescopes including the Atacama Large Millimeter/submillimeter Array (ALMA) in Chile, to measure a signature of magnetic fields around the black hole known as polarization. Polarization is the orientation of the electric fields in light and radio waves and it can indicate the presence and alignment of magnetic fields.

“We are now seeing the next critical piece of evidence for understanding how magnetic fields behave around black holes, and how activity in this very compact region of space can drive powerful jets,” said Monika Mocibrodzka, Coordinator of the EHT Polarimetry Working Group and Assistant Professor at Radboud University in the Netherlands.

A new view of the region closest to the supermassive black hole at the center of the galaxy Messier 87 (M87) has shown important details of the magnetic fields close to the black hole and hints about how powerful jets of material can originate in that region.

Scientists were able to map magnetic field lines near the edge of M87’s black hole thanks to new images obtained with the EHT and ALMA. That same black hole was imaged for the first time in 2019 by the EHT. That image revealed a bright ring-like structure with a dark central region – the shadow of a black hole. The most recent images are crucial in explaining how M87, which is 50 million light-years away from Earth, can launch energetic jets from its core.

M87’s black hole is more than 6 billion times more massive than the Sun. Material drawn inward forms a rotating disk known as an accretion disk, which orbits the black hole in close proximity. The majority of the material in the disk falls into the black hole, but some escape and are ejected far out into space in jets moving at nearly the speed of light.

“The newly published polarized images are critical to understanding how the magnetic field enables the black hole to’eat’ matter and launch powerful jets,” said Andrew Chael, a NASA Hubble Fellow at the Princeton Center for Theoretical Science and the Princeton Gravity Initiative in the United States.

The researchers compared the new images of the magnetic field structure just outside the black hole to computer simulations based on various theoretical models. Only models with strongly magnetized gas can explain what they see at the event horizon, they discovered.

“The observations imply that the magnetic fields at the black hole’s edge are strong enough to push back on the hot gas and assist it in resisting gravity’s pull. Only gas passing through the field can spiral inwards to the event horizon “Jason Dexter, Assistant Professor at the University of Colorado Boulder and Co-Chairman of the EHT Theory Working Group, elaborated.

To make the new discoveries, the scientists linked eight telescopes around the world, including ALMA, to form the EHT, a virtual Earth-sized telescope. The EHT’s impressive resolution is equivalent to that required to measure the length of a credit card on the Moon’s surface.

With this resolution, the team was able to directly observe the black hole shadow and the ring of light surrounding it, with the new image clearly demonstrating that the ring is magnetized. The EHT collaboration published the findings in two papers in the Astrophysical Journal Letters. More than 300 researchers from various organizations and universities around the world took part in the study.

A third paper based on ALMA data was also published in the same volume of the Astrophysical Journal Letters, led by Ciriaco Goddi, a scientist at Radboud University and Leiden Observatory in the Netherlands.

“The combined data from the EHT and ALMA allowed scientists to investigate the role of magnetic fields from the event horizon to far beyond the core of the galaxy, along its powerful jets extending thousands of light-years,” Goddi explained.

The National Radio Astronomy Observatory is a National Science Foundation facility run by Associated Universities, Inc. under a cooperative agreement. More than 300 researchers from Africa, Asia, Europe, North and South America are involved in the EHT collaboration. The international collaboration is working to create a virtual Earth-sized telescope in order to obtain the most detailed black hole images ever obtained. The EHT, which is supported by significant international investment, connects existing telescopes using novel systems, resulting in a fundamentally new instrument with the highest angular resolving power ever achieved.

The Atacama Large Millimeter/submillimeter Array (ALMA), an international astronomy facility, is a collaboration between ESO, the US National Science Foundation (NSF), and Japan’s National Institutes of Natural Sciences (NINS). ALMA is funded by ESO on behalf of its Member States, by the National Science Foundation (NSF) in collaboration with the National Research Council of Canada (NRC) and the Ministry of Science and Technology (MOST), and by NINS in collaboration with Academia Sinica (AS) in Taiwan and the Korea Astronomy and Space Science Institute (KASI).