Nucleolus: The nucleolus is a round body located inside the nucleus of a eukaryotic cell. It is not surrounded by a membrane but sits in the nucleus. It is mainly involved in assembling the ribosomes, modification of transfer RNA and sensing cellular stress. The denser, small and round body found in the nucleus is the nucleolus. Every nucleus normally contains a single nucleolus. The nucleolus is usually attached to a certain area of a particular chromosome. The region of the chromosome where it remains attached is called `secondary constriction’.

Chemical composition: The nucleolus is composed of RNA and proteins which form around specific chromosomal regions. The main compositions of the nucleolus are protein, RNA and a trace of DNA. This structure is made up of proteins and ribonucleic acids (RNA). Its main function is to rewrite ribosomal RNA (rRNA) and combine it with proteins. It then sends the subunits out to the rest of the cell where they combine into complete ribosomes. This results in the formation of incomplete ribosomes. Ribosomes make proteins; therefore, the nucleolus plays a vital role in making proteins in the cell. There is an uninterrupted chain between the nucleoplasm and the interior parts of the nucleolus, which occurs through a system of nucleolar passages.

Physical structure: Nucleolus is usually divided into three parts namely fibrous, granular and matrix. It is a region found within the cell nucleus that is concerned with producing and assembling the cell’s ribosomes. It occupies around 25% of the volume of the nucleus. 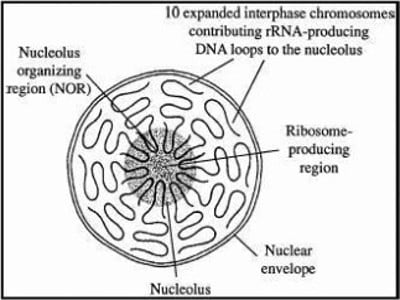 Function: To synthesize various types of DNA and protein and preserve them. It is considered as the brain of the nucleus. It is mainly involved in the production of subunits which then together form ribosomes. Therefore, it plays a significant responsibility in protein synthesis and the production of ribosomes in eukaryotic cells. Because of its close connection to the chromosomal substance of the cell and its significant role in producing ribosomes, the nucleolus is thought to be the cause of a diversity of unusual human diseases.

Chromosome: In every nucleus, there are a definite number of chromosomes according to the characteristic of definite species. It can be seen under the microscope after proper staining, only in a dividing cell. Every chromosome contains one or more centromere, one chromonema or more chromonemata and some chromosome may have satellite. Chromosome bears a number of genes and genes are responsible for expressing characteristics of different species.