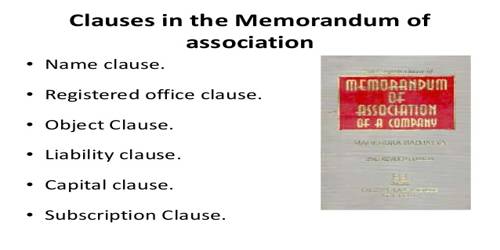 Object clause of Memorandum of Association

A company’s memorandum of association, often simply called the “Memorandum”, is the document that governs relations between the company and the outside world. It serves as the constitution of the company. It is a public document and may be inspected by anyone, usually at the public office where it is lodged. The structure and formulation of Joint Stock Company are made on the basis of the memorandum of association.

Object clause: An objects clause is a provision in a company’s constitution stating the purpose and range of activities for which the company is carried on. This clause is quite important and must be very carefully drafted as it determines the activities of the company. It defines the purpose for which the company is formed. It clearly defines the sphere of the company’s activities. A company is not legally entitled to undertake an activity, which is beyond the objects stated in this clause. If there is any transaction which is outside the scope of the powers specified in the objects clause, it will be regarded as ultra-vires. The objective clause tells the existing potential fields of the business and finds the future potential fields about the expansion of the business. The legal problems concerning objects clauses are now largely historical artifacts.

The object clause must not include anything which is:

(a) Illegal or opposed to the public interest;

(b) Against the general law of the country; and

(c) Contradictory to the Companies Act itself.

Is Business a Profession?