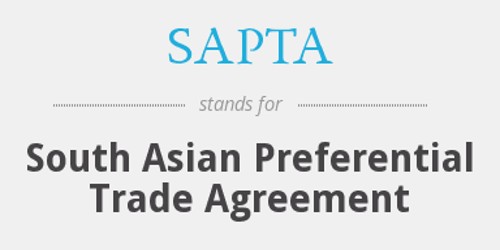 The main objective of the South Asian Preferential Trade Agreement (SAPTA) agreement was to reduce the trade barriers of the member countries of SAARC. As a result, the balance of trade in this region is reduced. Like other regional agreements, SAFTA is a regional agreement and it has some objectives. SAPTA, therefore, is the first step towards higher levels of trade and economic co-operation in the region.

Another important objective of the SAPTA is to promote and maintain reciprocal trade and economic co-operation among the member states through the exchange of trade concessions.  SAPTA would be improved gradually for the mutual benefit of all the practice in the product areas covering raw material. semi-finished goods and finished goods for mutual convenience.

SAPTA makes provision for information, consultation, and dispute settlement. Least development countries such as Bhutan and Nepal among the members are given extra concessions. Members can withdraw from SAPTA by giving a 6-month notice. The main components are – Tariff, Para Tariff, and Non-Tariff.

So like ether regional integration SAPTA was formed to reduce the trade and non-trade barriers of the member countries. Free trade activities are continued to obtain the Objectives of SAPTA. So SAPTA is a very important agreement for the region of South Asia.

Discuss the basic features of business