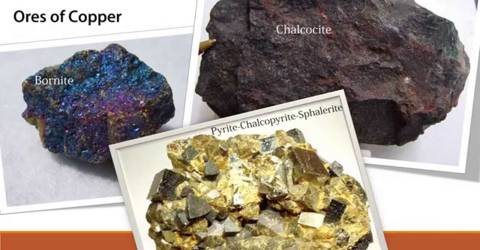 Minerals: the naturally occurring metallic compounds found in earth’s crust which can be obtained by mining are called minerals. A mineral may contain one or more than one metallic compounds. Metal may be present in number of minerals, but all minerals aren’t suitable for the extraction of metals commercially on a large scale. Very few metals such as the noble metals, i.e., Gold, Silver, Platinum,etc are present in their original metallic forms in nature. The process of extracting metal ores buried deep underground is called Mining. The metal ores are found in the earth’s crust in varying abundance.

Haematite (Fe2O3) & iron pyrites (FeS2) are both minerals of iron. Both of them contain high percent of iron. Haematite is a mineral as well as an ore of iron.

Iron pyraites is a mineral, not an ore of iron. Thus, we can say that all ores are minerals, but all the minerals aren’t ores.

Difference between a Particle and a Wave