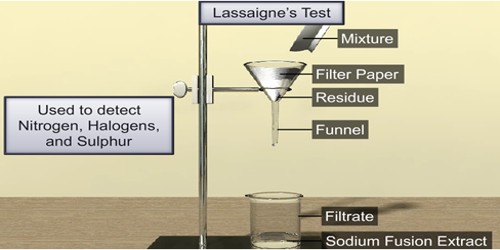 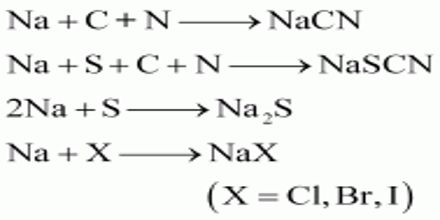 Why is Sodium (Na) used in Lassaigne’s test?

Estimation of S & P can be done together by the callus method.

Halogens present in an organic compound forms sodium halide on fusion with sodium metal. Sodium halide extracted with water can be easily identified by adding silver nitrate solution after acidifying with dil.HNO3.

If chlorine is present, a white curdy precipitate soluble in ammonium hydroxide solution is formed.

The carbon and nitrogen present in the organic compound on fusion with sodium metal give sodium cyanide (NaCN) soluble in water. This is converted into sodium ferrocyanide by the addition of enough quantity of ferrous sulfate. Ferric ions generated during the process react with ferrocyanide to form Prussian blue precipitate of ferric ferrocyanide.

If sulphur is present in the organic compound, sodium fusion will convert it into sodium sulphide. Sulphide ions are readily identified using sodium nitroprusside.

Why the Extraction of Copper from Chalcopyrite is so difficult?

Observation of Electrical Conductivity of Metal