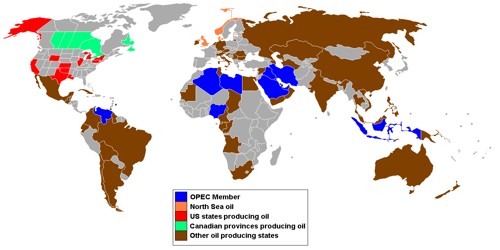 OPEC is an example of a producer cartel that cartel relies on quotas to influence prices. It is a group of commodity producing countries that have significant control over supply and that band together to control output and price. OPEC is part of a larger category of energy commodities; which also includes coal and natural gas. The Organization of Petroleum Exporting Countries is an organization of 12 oil-producing countries. It controls 61 percent of the world’s oil exports and holds 80 percent of the world’s proven oil reserves.

OPEC is not confined to the Middle East. The members are Algeria, Indonesia, Iran , Iraq , Kuwait, Libya, Nigeria, Qatar, Saudi Arabia, the United Arab Emirates, and Venezuela; OPEC that can influence supply and price, periodically at least annually OPEC oil ministers gather together to determine the quota for each country based on estimates of supply and demand.

Politics are also an important dimension, to OPEC deliberations. OPEC member countries With Large Populations need large Oil revenues to fund government programs. As a result, they are tempted to exceed their export quotas to generate more revenues. A Major reason for the invasion of Kuwait by Iraq in 1990 was because Kuwait was producing more than its quota which depressed World Oil prices. Iraqi president Saddam Hussain blamed Kuwait or low world Oil prices, which reduced the amount of revenue Iraq could earn with Oil exports. Thus he felt Justified in invading Kuwait to gain control of its Oil supplies. So that he could Increase his own Oil revenues.

Differences between Pool and Cartel

Define and Describe on Cooperative Society