The ancient astronomers contributed a great deal by identifying the planets in the solar system and carefully plotting the variations in their positions of the sky over the periods of many years. These data eventually led to models and theories of the solar system.

The first major theory, called the Geo-centric theory was developed by a Greek astronomer, Ptolemy. The Earth is considered to be the centre of the universe, around which all the planets. the moons and the stars revolve in various orbits. The great Indian Mathematician and astronomer Aryabhat of the 5th century AD stated that the Earth rotates about its axis. Due to lack of communication between the scientists of the East and those of West, his observations did not reach the philosophers of the West. 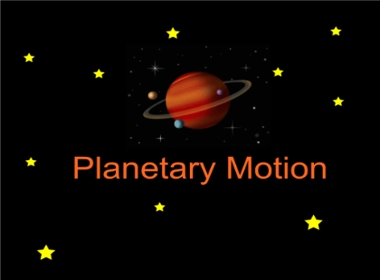 Nicolaus Copernicus, a Polish astronomer proposed a new theory called Helio-centric theory. According to this theory, the Sun is at rest and all the planets move around the Sun in circular orbits. A Danish astronomer Tycho Brahe made very accurate observations of the motion of planets and a German astronomer Johannes Kepler analysed Brahe’s observations carefully and proposed the empirical laws of planetary motion.