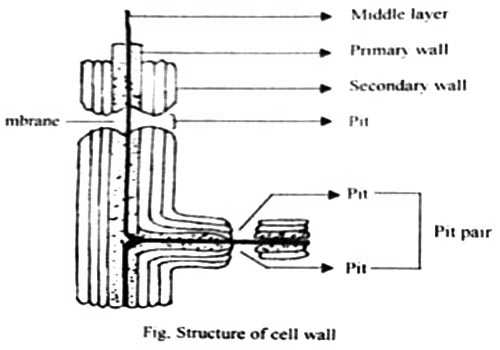 Plant Cell wall: The cellulose made, hard and non-living membrane around the protoplasm of each cell is said to be cell wall.

Middle lamella: Middle lamella is formed at the telophase stage of mitotic division Phragmoplast of cytoplasm and vesicles or droplets of Golgi bodies combined form the middle lamella.

Primary cell wall: Cellulose and hemicellulose etc that deposited on the middle layer combined form a thin layer Ibis is a primary layer It is formed at the inner surface of the middle lamella.

(i) The cell wall is usually composed of cellulose, polysaccharide.

(ii) The primary cell wall is formed by the deposition of cellulose, lignin, pectin etc. from the secretion of protoplasm.

(i) Cell wall gives the perfect shape of the cell

(ii) It protects the protoplasm from the external adversity of the cell.

(iii) It provides the cell with essential energy and rigidity.

Define Carbohydrate with Classification and Function