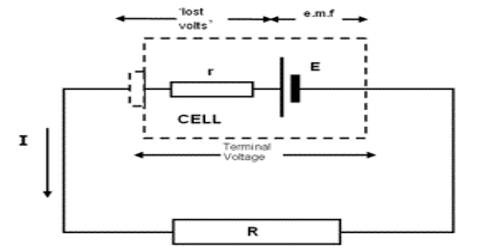 Relation between Internal resistance and Electromotive force of a cell 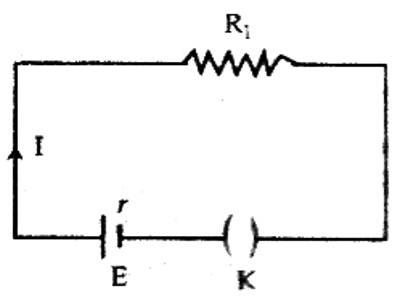 Normally, the value of internal resistance is very low. It the current in the circuit is I, then we get,

That means V is the potential difference between the terminals of the cell during the flow of current in the circuit.

The reason for the smaller value of terminal voltage than the electromotive force is due to the fact that some energy is needed for the current to flow through the internal resistance of the cell. As a result, potential drop takes place inside the cell. So it is seen that the potential difference between the two terminals of a cell decreases by an amount of ‘Ir’, that means ‘Ir’ amount of voltage does not contribute in the circuit, rather becomes lost. For this reason, ‘Ir’ is called ‘lost volt‘. According to equation (1), if R1 is very small, the terminal voltage becomes much smaller than the electromotive force. On the other hand, when R1 is very large, then the terminal voltage becomes almost equal to the electromotive force. In equation (1), if 1 = 0, then E = V

i.e., when there is no current in the circuit that means, the circuit remains open, then the potential difference between the two ends at a cell is equal to its electromotive force.