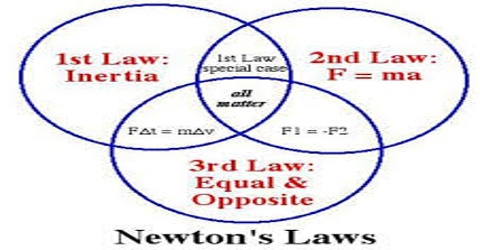 Third law: Every action has equal and opposite reaction.

From the first law we understand that it no external influence acts on a body, the body will not change its state. Body at rest will continue to be at rest and the body in motion will continue to be in motion. This happens due to inertia of a body. In doing something against this inertia, i.e., to change a body at rest to move or to change the motion of a moving body, force is to be applied on the body.

From this idea, we can apply Newton’s second Law of motion. More the mass of a body, the more the momentum of that body. Suppose mass of a moving body is m and velocity is v; mass of another body is 2m but velocity is same, i.e., velocity is v.

In other way, if forces F1 and F2 are applied on two bodies along the same straight line then while moving it may happen that the two bodies might have collided with each other. Whenever they are collided then second body apply equal and opposite reaction force on the first body. In this case, the force by which the second body is acted is called action force and this body after collision applies force on the first body in the opposite direction which is called reaction force. From Newton’s third law of motion it is known that this action and reaction are equal.