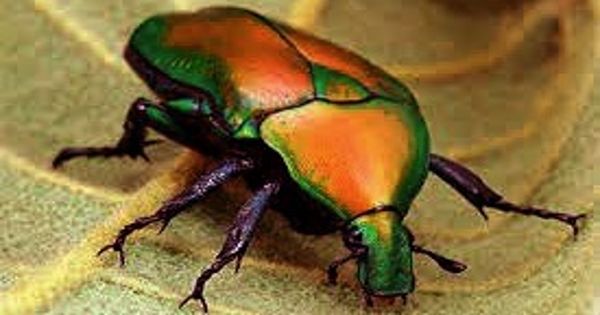 The unique mechanical and optical properties of an Asian beetle’s exoskeleton have the potential to provide a fascinating new insight into how to develop new, effective bio-inspired technologies.

A team of international scientists, led by Professor Pete Vukusic of the University of Exeter, has discovered a unique and previously unknown property within the carapace of the flower beetle, a member of the scarab beetle family.

The study discovered that the beetle has small micropillars within its carapace (the upper section of its exoskeleton) that provide the insect with both strength and flexibility, allowing it to withstand damage effectively. Importantly, these micropillars are incorporated into highly regular layering in the exoskeleton, giving the beetle an intensely bright metallic color appearance.

Researchers have revealed a distinctive and previously unknown property within the carapace of the flower beetle—a member of the scarab beetle family.

The researchers used sophisticated modeling techniques to determine which of the two functions—very high mechanical strength or conspicuously bright color—was more important to the beetle’s survival in this new study.

They discovered that, while these micropillars do increase the toughness of the beetle shell, they are most useful for optimizing the scattering of colored light, which gives the beetle its conspicuous appearance.

The findings were published this week in the prestigious journal Proceedings of the National Academy of Sciences, or PNAS.

Professor Vukusic, one of the study’s three leaders, along with Professor Li at Virginia Tech and Professor Kolle at MIT, stated: “The astounding discoveries made possible by this research have only been made possible through close collaboration between Virginia Tech, MIT, Harvard, and Exeter, in labs that pioneer in the fields of materials, mechanics, and optics. Our next venture, which will make use of these bio-inspired principles, will be an even more exciting adventure.”

The seeds of this groundbreaking research were planted more than 16 years ago as part of a short project developed by Professor Vukusic in the Exeter undergraduate Physics labs. Early tests and measurements performed by enthusiastic undergraduate students revealed the possibility of intriguing multifunctionality.

The original students investigated the shape and structure of beetle carapce in order to deduce the simple origin of their color. They did, however, notice the presence of strength-inducing micropillars for the first time.

Professor Vukusic eventually took these preliminary findings to collaborators Professor Ling Li at Virginia Tech and Professor Mathias Kolle at Harvard and then MIT, both of whom specialize in materials sciences and applied optics. The combined research team was also to confirm the unique role played by the micropillars in enhancing the beetles’ strength and toughness without compromising its intense metallic color using much more sophisticated measurement and modeling techniques.

The study’s findings could also inspire a new generation of bio-inspired materials, in addition to more traditional evolutionary research. Scientists can develop new techniques to replicate and reproduce the exoskeleton structure while ensuring that it has brilliant color appearance with highly effective strength and toughness by understanding which of the functions provides the greatest benefit to these beetles.

Professor Vukusic went on to say: “Such natural systems never fail to impress with their performance, whether optical, mechanical, or in another area of function. The way their optical or mechanical properties appear to be highly tolerant of all manner of imperfections also continues to teach us about scientific and technological avenues we must pursue. On this journey, we will encounter some fascinating science.”

PNAS published the paper “Tough color: Microstructural design for mechanical-optical multifunctionality in the exoskeleton of the flower beetle Torynorrhina flammea.”