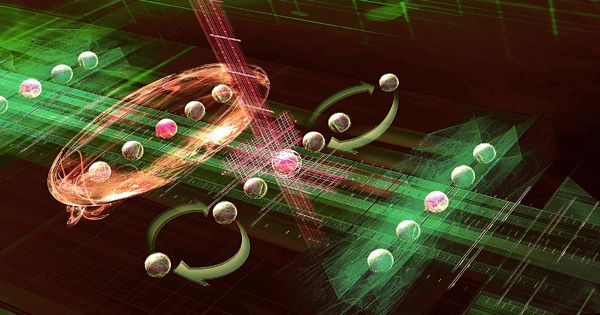 A team of researchers in the US (UMass Amherst, Northwestern University) encoded a logical qubit in the Schrödinger cat-like multiphoton state of the superconducting cavity and demonstrated a remedial dissipation mechanism that stabilizes the error-syndrome operator, the parity of the photon number. In order to construct a universal quantum computer from fragile quantum components, the successful implementation of quantum error correction (QEC) is an integral prerequisite and a core challenge. QEC is used in quantum computation and has the ability to solve theoretical problems outside the limits of supercomputers, to shield quantum information from errors caused by various noise.

Implemented with continuous-wave control fields only, this passive protocol preserves quantum information by automatically correcting single-photon-loss errors and increases the coherence time of the bosonic qubit by more than a factor of two. In comparison to the technical complexity needed for prior QEC demos, QEC is realized in a modest hardware setup with neither high-fidelity readout nor fast digital feedback.

Today’s computers are equipped with transistors that reflect classic bits (0’s or 1’s). Quantum computation is an innovative new paradigm in computing using quantum bits (qubits) where quantum superposition can be used for exponential increases in computational power. Fault-tolerant quantum computation will massively advance the exploration of new technologies, artificial intelligence, biochemical engineering and many other disciplines.

Since qubits are fundamentally weak, the most outstanding task of constructing such large quantum computers is the effective implementation of quantum error correction. Current QEC experiments are active, involving frequent error checks and immediate correction, which is very demanding in hardware capital and thus hinders the scaling up of quantum computers.

On the other side, the researchers’ experiment achieves passive QEC by tailoring the friction (or dissipation) encountered by the qubit. Since friction is widely thought to be a nemesis of quantum coherence, this finding can seem very shocking. The key is that the dissipation needs to be precisely built in a quantum way. This general technique has been technically understood for about two decades, but the realistic way to accomplish this dissipation and bring it into practice for QEC has been a struggle.

“Although our experiment is still a rather rudimentary demonstration, we have finally fulfilled this counter-intuitive theoretical possibility of dissipating the QEC,” Chen says. “Looking ahead, the implication is that there will be more options to shield our qubits from error and to do so less costly. This experiment thus raises the possibility of theoretically creating a useful, fault-tolerant quantum machine in the medium to long term.”

Chen explains in layman terms how weird the quantum universe can be. “As in the popular (or infamous) case of the German scientist Erwin Schrödinger, a cat packed in a closed box may be dead or alive at the same time. Any logical qubit in our quantum processor is like a mini-Schrödinger pet. In reality, we simply call it ‘cat qubit.’ Having a lot of cats like that will help us solve some of the world’s most challenging problems.

“Unfortunately, it’s very difficult to keep a cat in that way because any gas, light, or anything leaking into the box will destroy the magic: the cat will either be dead or just a regular live cat,” Chen says. “The most simple approach to secure Schrodinger’s cat is to make the box as tight as possible, but it still makes it more difficult to use for computing. What we just saw was like coloring the interior of the box in a special way, and that somehow makes the cat to survive the unavoidable harm of the outside world.”