A body may be considered to be made up of an indefinitely large number of particles, each of which is attracted towards the centre of the Earth by the force of gravity. These forces constitute a system of like parallel forces. The resultant of these parallel forces known as the weight of the body always acts through a point, which is fixed relative to the body, whatever be the position of the body. This fixed point is called the centre of gravity of the body.

The centre of gravity of a body is the point at which the resultant of the weights of all the particles of the body acts, whatever may be the orientation or position of the body provided that its size and shape remain unaltered. 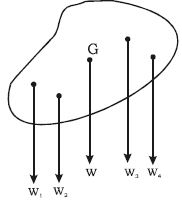