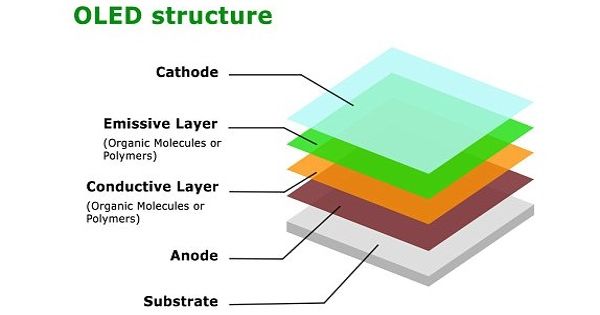 Researchers are introducing a novel design principle for high-efficiency and low-voltage vertical organic light-emitting transistors. With the latest interface design and manufacturing technologies, the team paves the way for the broad application of powerful OLED active matrix displays.

Imagine a monitor as thin as paper that can be folded into a short tube, twisted around things like a mobile phone, lowered to the ground, or even pounded and still working. In addition, the exhibition displays very pure color and crystal-clear high-speed motion pictures which can be seen from all directions with the same high quality while using very little electricity. These displays are close to becoming a reality, thanks to organic LEDs (OLEDs).

Researchers work on a new strategy for efficient OLED active matrix displays. They work jointly on the development of novel organic materials and devices for high-performance, flexible, and possibly even biocompatible electronics and optoelectronics of the future.

In the community of Prof. Karl Leo, physicists, material scientists and engineers are working together on the invention of new organic materials and high-performance, scalable, and potentially biocompatible electronics and optoelectronics for the future. Increasing the efficiency of organic equipment is one of the main challenges in their study. It was just last year that Dr. Hans Kleemann’s team revealed a significant milestone in the field of reliable, printable vertical organic transistors.

After two decades of intensive global study, the organic light-emitting diode (OLED) has slowly emerged as the supreme display technology of choice over the coming decades. Portable active matrix OLED displays have now become commonplace, and now big, ultra-high-definition 4K TVs are mass-produced. More exotic technologies such as portable screens have recently been commercialized. With the success in displays, researchers are aggressively moving technologies forward to the promising demand for solid-state lighting.

Now Dr. Zhongbin Wu, Dr. Yuan Liu, and Ph.D. student Erjuan Guo are presenting the first electronic computer that incorporates a vertical organic permeable base transistor (OPBT) and an OLED. With this novel system design of an organic permeable base light-emitting transistor (OPB-LET), the researchers have succeeded in integrating the functions of a highly efficient switching transistor and an organic light-emitting diode as commonly used in active matrix displays. Active matrix liquid crystal displays (AMLCDs) typically contain a matrix of thin-film transistors to move LCD pixels. Each pixel has a circuit of active components (mostly transistors). In this sense, a growing interest has been created by organic light-emitting transistors, three-terminal devices incorporating a thin-film transistor with a light-emitting diode. Yet increasing their performance while maintaining the operating voltage down remains a crucial problem.

“The clandestine to the construction of high-performance OPB-LETs is the permeable base electrode situated at the center of the unit, which forms a distinctive optical microcavity and regulates the injection and transport of the load carrier. Fast efficiency (up to 24.6 percent), high luminance (up to 12.513 cd m-2), and low drive voltages (3-terminal vertical optoelectronic devices) can be concurrently engineered (up to 12.513 cd m-2) “5.0 V),” says Erjuan Guo.

The efficiency of the OPB-LETs shown in this work is comparable to the state-of-the-art OLEDs and the state-of-the-art low-voltage organic transistors. Prof. Karl Leo explains: “We expect this new interface concept to pave the way for highly efficient versatile displays with a very simple pixel architecture.”