Home Business Rules of Origin and Regional Content of NAFTA 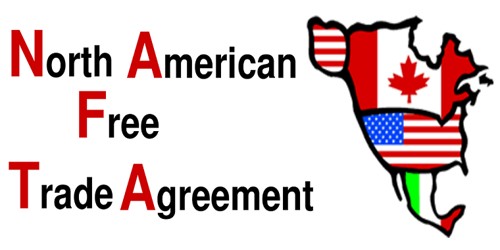 North American Free Trade Agreement (NAFTA) which includes Canada, Mexico, and the United States of America went into effect in 1994; The United States of America and Canada historically have had various forms of mutual cooperation. That makes NAFTA the world’s largest free trade agreement. An important component of NAFTA is the concept of rules of origin and regional content. Because NAFTA is a free trade agreement and not a custom union each country sets its own tariffs to the rest of the World. That’s why a product entering into the United States from in Canada must have a commercial or custom invoice that identifies the product in ultimate origin. Otherwise, an exporter from a third country would always ship the product to the NAFTA country with the lowest tariff and then re-exports it to the other two countries duty free.

Rules of origin ensure that only goods that have been the subject of substantial economic activity within the free trade area arc eligible for the more liberal tariff conditions created by NAFTA.

According to regional content rules, at least 50 percent of the net cost of most products must come from the NAFTA region.

How to Form a usual Partnership Business ?

Structure of a formal business report