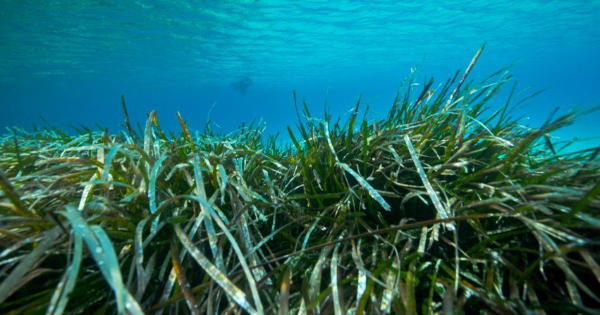 A paper published by the University of California, Davis, spans six years and seven seagrass meadows along the California coast, making it the most comprehensive study of how seagrasses can buffer ocean acidification to date. The study, which was published today in the journal Global Change Biology, discovered that these unnoticed ecosystems can alleviate low pH, or more acidic, conditions for extended periods of time, even at night when photosynthesis is not present. It was discovered that grasses can reduce local acidity by up to 30%.

“This buffering temporarily restores seagrass environments to preindustrial pH levels, similar to what the ocean might have experienced around 1750,” said co-author Tessa Hill, a UC Davis professor in the Department of Earth and Planetary Sciences and the Bodega Marine Laboratory.

When you think of seagrasses, you might imagine slimy grasses that touch your feet as you walk along the beach. However, a closer look at these underwater meadows reveals an active, vibrant ecosystem brimming with surprises.

Sea turtles, bat rays, leopard sharks, fish, harbor seals, seahorses, and colorful sea slugs are just a few of the animals that visit seagrass ecosystems for the food and habitat they provide. They serve as nurseries for species such as Dungeness crab and spiny lobster, and many birds visit seagrass meadows specifically to eat what’s beneath the swaying blades of grass.

“It’s a marine forest without trees,” said lead author Aurora M. Ricart, a postdoctoral scholar at UC Davis Bodega Marine Laboratory who is now at Bigelow Laboratory for Ocean Sciences in Maine. “The forest’s scale is smaller, but the biodiversity and life in that forest are comparable to what we have in terrestrial forests.”

Between 2014 and 2019, the scientists deployed sensors to collect millions of data points from seven eelgrass seagrass meadows stretching from Northern to Southern California for the study. These include Bodega Harbor, three Tomales Bay locations, Elkhorn Slough, Newport Bay, and Mission Bay.

Buffering occurred in these locations 65 percent of the time on average, ranging from nearly pristine reserves to working ports, marinas, and urban areas. Despite belonging to the same species, eelgrass behavior and patterns differed from north to south, with some sites increasing pH more quickly than others. The time of year was also a factor, with more buffering occurring in the spring when grasses were most productive.

When the sun shines, seagrasses naturally absorb carbon as they photosynthesize, which contributes to their buffering ability. However, the researchers wondered if seagrasses would simply re-release this carbon after the sun went down, canceling out the day’s buffering? They investigated this question and discovered a surprising and novel result:

“What is shocking to everyone who has seen this result is that we see effects of amelioration during the night as well as during the day, even when there is no photosynthesis,” Ricart said. “We’re also seeing high pH periods that last longer than 24 hours, and sometimes even weeks, which is very exciting.”

Bodega Harbor in Northern California and Tom’s Point in Tomales Bay stood out as particularly effective at buffering ocean acidification. Identifying why and under what conditions this occurs across different seascapes is one of the questions that needs to be researched further.

The findings have implications for aquaculture management, as well as climate change mitigation, conservation, and restoration efforts. Ocean acidification is increasing globally, while seagrass ecosystems are declining. As more carbon dioxide is emitted into the atmosphere, the ocean absorbs roughly one-third of it. This alters the pH balance of the water and can obstruct the shell formation of species such as oysters, abalone, and crab.

“We already knew that seagrasses are valuable for so many reasons, from climate mitigation to erosion control and wildlife habitat,” said co-author Melissa Ward, who was a graduate student researcher at UC Davis at the time of the study and is now a postdoctoral researcher at San Diego State University. “This study demonstrates yet another reason why their preservation is critical. We now have evidence that the state’s directive to investigate these ideas for reducing ocean acidification is a worthwhile direction to pursue and warrants further investigation.”