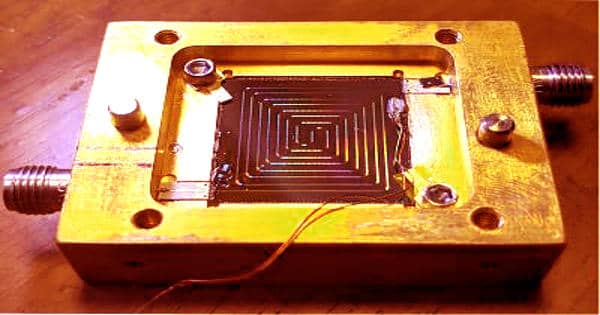 Researchers at the National Institute of Standards and Technology (NIST) have invented the miniature thermometer with big potential applications such as monitoring the temperature of processor chips in superconductor-based quantum computers, which must stay cold to work properly.

Unlike conventional cryogenic thermometers, this new superconducting thermometer is smaller, faster, and more convenient for chip-scale devices and mass-produced.

NIST’s superconducting thermometer actions temperatures down below 1 Kelvin (minus 272.150C or minus 457.870F), down to 50 milliKelvin (mK), and probably 5 mK. It is more compact, faster, and much more hassle-free than common cryogenic thermometers for chip-scale gadgets and could be mass-made. NIST scientists describe the style and operation in a new journal paper.

Only 2.5 by 1.15 millimeters in size, the new thermometer can be embedded in or stuck to another cryogenic microwave device to quantify its temperature when mounted on a chip. The analysts utilized the thermometer to show quick, precise measurements of a superconducting microwave amplifier’s heating.

The technology is a spinoff of NIST’s custom superconducting sensors for telescope cameras, exclusively microwave detectors shipped for the BLAST balloon.

“This was an exciting thought that swiftly grew into something quite handy,” team chief Joel Ullom reported. “The thermometer enables researchers to measure the temperature of a huge selection of elements in their take a look at offers at extremely little value and with no introducing a significant selection of extra electrical connections. This has the likely to gain researchers doing the job in quantum computing or applying minimal-temperature sensors in a vast variety of fields.”

The thermometer is composed of a superconducting niobium resonator coated with silicon dioxide that later interacts with the resonator to shift the frequency at which it naturally vibrates. The interaction occurs because of atoms “tunneling” between two sites, a quantum-mechanical effect.

The NIST thermometer is based mostly on a new application of the theory that the all-natural frequency of the resonator is dependent on the temperature. The thermometer maps variations in frequency, as measured by electronics, to a temperature. By distinction, traditional thermometers for sub-Kelvin temperatures are primarily based on electrical resistance. They require wiring routed to area-temperature electronics, including complexity and possibly leading to heating and interference.

The NIST thermometer measures temperature in about 5 milliseconds (thousandths of a 2nd), much a lot quicker than most common resistive thermometers at about one particular-tenth of a 2nd. The NIST thermometers are also effortless to fabricate in only a solitary method stage. They can be mass-created, with far more than 1,200 fittings on a 3-inch (close to 75-millimeter) silicon wafer.

The thermometer takes about 5 milliseconds to measure the temperature. Additionally, it maps changes in frequency, as measured by electronics, to a temperature.