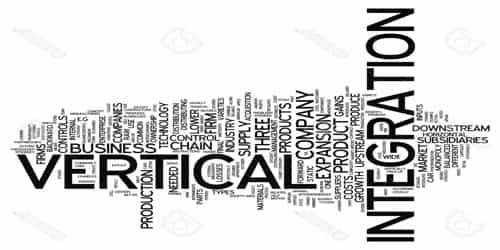 Some examples of Vertically Integrated Companies

When a company expands its business into areas that are at different points on the same production path, such as when a manufacturer owns its supplier and/or distributor then it’s known as vertical integration. It is a strategy where a firm acquires business operations within the same production vertical. It is when a company controls more than one stage of the supply chain.

Vertical integration is the expansion of a firm into different steps along its production path or supply chain. A vertically integrated production company, for example, might hold a farm, a produce distribution business, and a greengrocery. A farm’s acquisition of a distributorship would constitute forward integration, while the green grocer’s launch of a distributorship would be considered backward integration. Followings are some of the companies who use vertical integration;

Successful vertical integration can have a positive effect on a company’s profits. A distributor that also operates production facilities, for example, not only eliminates the per-unit markups it once endured but also puts the firm in a position to maintain strict quality control of the product, thereby reducing costs of returns and repairs. Richard Branson’s Virgin Records is an example of successful backward integration. As a lone record store, Virgin barely kept Branson afloat. Once Branson expanded into talent management and record production, however, the product that once cost the record store money became a profit center.

A 2010 story in the Beedie School of Business News featured the story of British Columbian farmer Bill Vanderkooi, who with vertical integration and a vision, turned a family dairy farm into a healthy living empire. Vanderkooi realized his farm’s brands would never succeed without a special identity. He decided in 2000 to link them to health by establishing his own organic feed business. With his farm producing eggs from free-range hens and omega-3 milk from his specially fed cows, Vanderkooi then launched his own food brand and grocery store. In 2009, sales from Vanderkooi’s umbrella company, the Nutriva Group, reached $5 million, and $10 million is projected for 2011.

The Maine lobster that keeps the devoted clientele at Luke’s Lobster coming back for more is a testament to vertical integration’s beneficial effect on quality and price control. While Luke Holden takes care of business at his three Manhattan, New York, eateries – and one roving lobster truck, named “Nauti” – his father operates their Maine seafood company. Being in control of both production and retail, the Holdens not only eliminate the middleman but also are certain that Luke’s Lobster serves their seafood at the best price.

How to develop your Career Plan if you are just joining with an MNC?